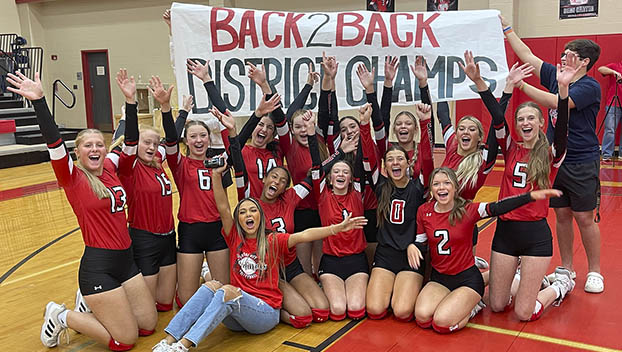 The Lady Cardinals take on the Liberty Lady Panthers, the fourth-place team out of District 20-4A, in the 4A Region III bidistrict playoffs Tuesday at 6 p.m. at East Chambers High School in Winnie.

Mackenzie Haley led the Lady Bobcats (11-3 in district) with 17 kills while Lela Francis had nine and Greenlea Oldham eight.

The Lady Bobcats are finalizing their playoff destination for early next week. They take on Vidor in a warmup match Friday at 5 p.m. in Vidor.

Vidor swept Jasper in their last District 19-4A match of the season to finish 7-5 to earn the third-place playoff seed. Vidor takes on District 20-4A runnerup Hardin-Jefferson in the bidistrict round early next week.

SILSBEE – The Little Cypress-Mauriceville Lady Bears got a nice tuneup before entering the 4A Region III playoffs by downing the Silsbee Lady Tigers 25-15, 22-25, 25-13, 25-10 in their last District 19-4A match of the season.

The Lady Bears wrapped up 19-4A play with a 10-2 mark, earning a second-place playoff seed.

Chrissy Joseph had 20 digs, 11 kills and seven blocks for the Lady Bears.

The Lady Bears visit Nederland Friday at 4:30 p.m. for a warmup match. LC-M will then takes on Splendora, the District 20-4A third-place team, in the 4A Region III bidistrict playoffs Monday at 6 p.m. at Warren High School.