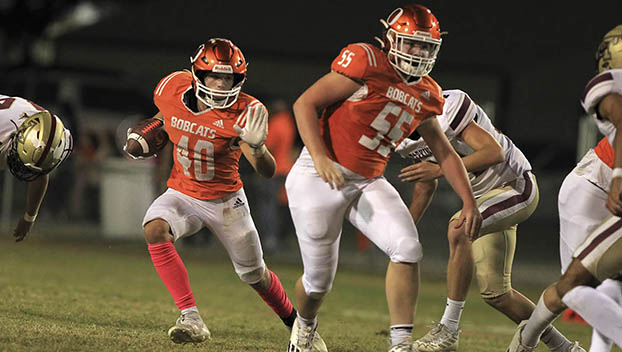 Orangefield offensive lineman Ethan Brown (55) looks to get a big block for running back Cameron Dischler (40) in their big district win against Tarkington. (Mark Pachuca/Orange Leader)

ORANGEFIELD — Looking to stay one step ahead of the likes of Anahuac and East Chambers in the District 10-3A Division I race, the Orangefield Bobcats are looking to avoid an upset at home to the always athletic Kirbyville Wildcats Thursday night at F.L. McLain Stadium.

The game has moved to Thursday at 7:30 p.m. due to the possible inclement weather that could approach the area.

The Bobcats are rested going into their battle with Kirbyville (3-6, 2-3) and are certainly not taking the Wildcats, who have won two in a row, for granted.

“Kirbyville always has some tremendous athletes at the skill positions over the years, and they still do,” said Orangefield coach Josh Smalley. “What is really different about them this year is their size. They have a 300-pound defensive end and nose guard that we’re going to have to deal with. They are big on the offensive and defensive lines. We have not seen a team with this much size up front since we played Buna.”

Smalley feels the Bobcats defense better be ready for anything out of the Kirbyville offense.

“They will come out in a power-I and try to run through you, then they will line up in the spread as a surprise and you have to figure out who their eligible receivers are,” said Smalley. “They do a lot of things similar to what Anahuac does.”

“They are capable of scoring some points,” said Smalley. “Their quarterback (Brayden Mahathay) has a really good arm and has a couple tall receivers he likes to get the ball to. He’s also capable of tucking it and running. They have some good backs, and one of them (Taylon Alfred) is built low to the ground and likes to bowl over you.”

On offense, the Bobcats would love to see their Slot-T continue producing pinball machine-like numbers.

In their four district wins, the Bobcats have piled up 1,718 yards on the ground, averaging 428.5 yards a game behind the running of backs Cameron Dischler, Gavin Perry-Koci, Case Singleton and quarterback Brayden Parker.

“Hopefully we can keep that up on offense and we’re so proud of what our offensive line has been doing. Those kids just keep getting better every week,” said Smalley. “We just need to play smart and eliminate the turnovers, which we have done a good job so far.”

Smalley felt the Bobcats got a lot done during their bye week last week.

“We did scale back some as far as the physicality of our practices last week and were able to nurse a few bumps and bruises, which was a good thing,” said Smalley. “We’re amping it up a little more this week. We really had some momentum going before the bye week and hopefully that can continue for us.”

The Bobcats close the season on the road at East Chambers Nov. 4. If the Bobcats win their last two games, it will be the program’s first outright district title since 1988. East Chambers is at Hardin this week while Anahuac has its bye this week before closing at home against Tarkington.

“We can’t think about that one yet,” said Smalley. “It may sound cliché but it is all about that week-to-week deal. All we should have on our minds right now are the Kirbyville Wildcats, and then we can go from there. The kids understand what is in front of them, and we don’t want to get ahead of ourselves. There are upset highlights every Friday night from somewhere, and we don’t want to be on that highlight reel this week. Kirbyville is a good team. We’ve seen them on film, and they have improved a bunch compared to four or five weeks ago. Every week is a new challenge.”