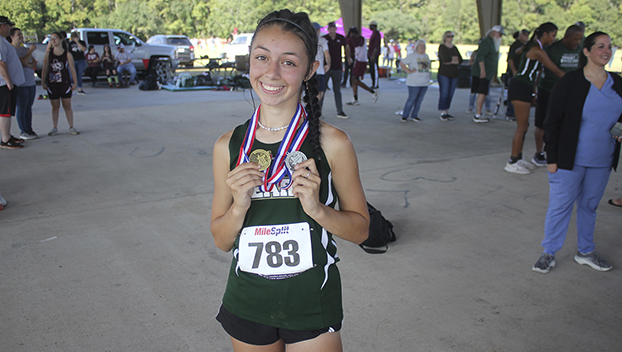 Fisher moves on to the Class 4A State Cross Country Championships, which are Nov. 4 at Old Settler’s Park in Round Rock. This marks Fisher’s third straight appearance at the State CC Championships.

The top four teams and the top 10 individuals not already on one of the advancing teams qualify for the State Championships.

The LC-M girls finished 17th in the team standings out of 23 teams. Vidor placed 18th and Silsbee 20th.

There were 173 runners in the field.

Ava Anderson ran strong as a regional qualifier for Bridge City, as the Lady Cardinals ran a 13:48.48 to finish 49th overall.

On the boys’ side of the ledger, Burnet’s Hudson Bennett won the 5-kilometer race, running a swift time of 15:18.14.

Huffman won the team title with 104 points followed by Marble Fallas (112), Giddings (113) and Jacksonville (132) as those four teams will all advance to State.

Bridge City’s Victor Hernandez was the top Orange County finisher, placing 53rd out of 177 runners with a time of 17:52.16.