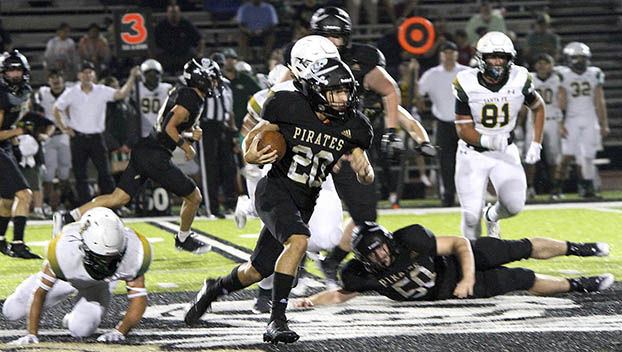 VIDOR – It’s all about holding serve for the Vidor Pirates these days, as they make a push for the playoffs and a high seed.

“We thought that the Livingston game was going to be huge for us because we both came in so equally matched,” said Vidor coach Jeff Mathews. “It was a battle for sure, and we were up just 9-7 going into the half. Our offense got rolling pretty good in the second half. I thought defensively we stood up well. We had about five guys on defense that were banged up after our Lumberton game. We had some kids step in there last week that really helped us contain Livingston.”

The Pirates offense was churning. Vidor rolled up 347 yards on the ground against the Lions. Senior fullback Jason Watson was the main instigator, rumbling for 175 yards.

“Our offensive line really set the tone for us and they played physical up front all night,” said Mathews. “We got big Jason rolling and he’s a monster sometimes trying to get down, and that opened up more holes for our tailbacks to get through. It was just a great overall night and a tremendous home win.”

The Pirates limited Livingston to 229 yards, including 91 on the ground on 32 rushing attempts.

The Pirates are honed in on a very young Huffman team as first-year head Falcons coach Joey Butcha saw just three starters return on each side of the ball.

The Falcons started 2-1 but have dropped four of their last five outings. Their lone district win came against Splendora 30-0 a couple weeks back. They fell to Lumberton 49-7 last week.

“Huffman has such a proud tradition and they are a team that will just continue to get better,” said Mathews. “Coach Butcha and staff are doing a great job. Usually you hear about teams having to play several sophomores, well Huffman has been playing a handful of freshman. We’ve been watching film on them and you can tell the progressions they are making and those freshman are playing like sophomores. They are going to be trouble the next two or three years.”

Mathews realizes what Huffman usually always brings to the table.

“Effort, those Huffman kids always bring it,” said Mathews. “Honestly, I thought we were better than they were talent-wise the last couple years and they handled us. We have to get on the bus and be focused because we have a lot at stake still.”

If the Pirates win out, and Lumberton beats LC-M this week, Vidor will get the No. 2 seed out of the district.

“If the Bears beat Lumberton, we could have one of those three-way tie deals at the end,” said Mathews said. “The district our district plays in bidistrict is stout. We’re talking about Kilgore and Tyler Chapel Hill, which are two great programs. Us and LC-M, we know what Chapel Hill is about after last year. So getting that No. 1 or No. 2 spot is what you want in our district. We tell the kids that they control their own destiny and they realize that. They know they are going to have to bring it the next two weeks. That’s what this time of year is always about.”