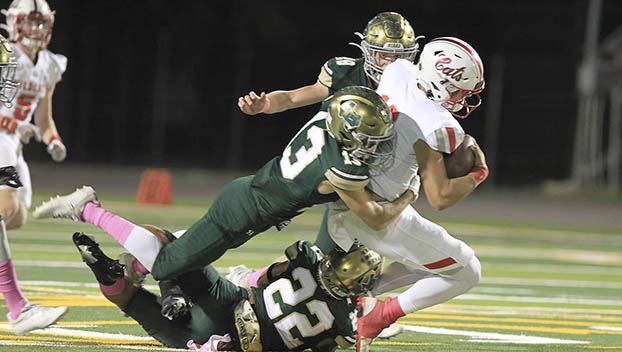 LITTLE CYPRESS – In their last two District 10-4A Division battles, the Little Cypress-Mauriceville Battlin’ Bears have gotten off to fast starts.

They need the same Friday night when they visit Lumberton to take on the potent Raiders.

“We’re going to have to bring our ‘A’ game for sure this week because Lumberton is as good as advertised,” said LC-M coach Eric Peevey. “They don’t have any weaknesses. They are strong up front on both sides of the ball and have playmakers on both sides of the ball. And their quarterback, Lucas Powell, is one of those special athletes that makes his team go.”

Powell helped led the Raiders to the playoffs as a sophomore, passing for 2,552 yards and 25 touchdowns. He has not let up as a junior.

Thus far Powell has completed 114-of-160 passes for 1,941 yards with 32 touchdowns and just six interceptions.

“The kid is just so darn accurate with his passes and he gets the ball out quickly,” said Peevey. “His receivers run great routes and have great hands. He can also survey the field well when he has time and always has a knack to find the open man. We have to do our best to apply as much pressure as we can.”

Trey Kersh leads the Raiders with 45 catches for 671 yards and nine TDs. Brady Fuselier has proven to be a suoerb deep threat with his 25 catches for 600 yards and a stunning 14 TDs. Kaleb Koch has 25 receptions for 383 yards and five scores.

The Bears defense will also try to contain a bruiser at running back for the Raiders in Jaddon Ward, who has powered his way to 875 yards and six TDs on 133 carries.

“The Ward kid is a beast and he’s hard to wrap up. You have to tackle him well because he always scraps for extra yardage. He’s like a human bowling ball,” said Peevey. “He’s big on fourth down running the ball, too. Lumberton is not afraid to go for it on fourth down, even on their own end of the field. They play with a lot of confidence.”

Powell has also shown he has wheels, rushing for 419 yards and three TDs on just 54 carries.

“Powell is deceptively quick. He’s not going to overwhelm with his speed but he has that knack to find some openings. That’s evident by his yards per carry, which is around eight when he tucks it in.”

Peevey would love for the Bears to get off to a fast start, which enabled them to two big wins over Livingston and Splendora the last two weeks.

“After the tough loss to Vidor, where we struggled early in that one, we wanted to come out and set the tone against Livingston early. We did that, and we did it again against Splendora,” said Peevey. “With that being said, we’re looking at a bigger beast in Lumberton. We have to play well early. It’s going to be a dogfight, play after play. It’s a big game for both teams and this is the type of game and atmosphere you want to play in.”

Peevey wants the Bears to sustain some good drives. Senior tailback Da’Marion Morris went over the 1,000-yard mark last week with a 160-yard effort against Splendora and has scored eight touchdowns in the last two games.

“We rested Da’Marion in the second half last week because we wanted him rested for the game this week,” said Peevey. “We’re hoping our offensive line can open some lanes for him. If we get him going, that opens up a whole lot of other stuff for us. There should be some nice battles up front by both teams on both sides of the ball.”