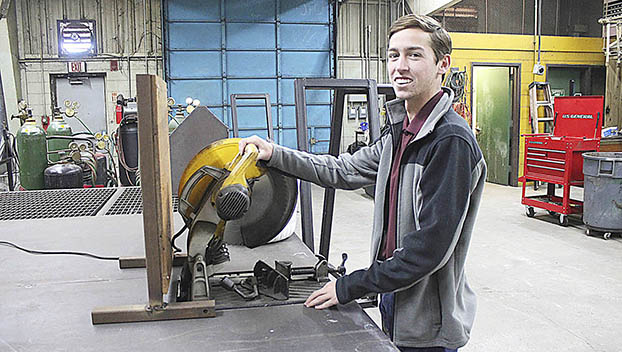 LC-M senior Jacob Gonzalez thrives at being busy with projects, including the ones in his welding class that he enjoys so much. (Van Wade/Orange Leader)

LITTLE CYPRESS — Jacob Gonzalez relishes every single moment of being hands-on, especially when he can help people.

The high school senior serves as president of the Little Cypress-Mauriceville Student Body, works in his welding class, is a St. Mary Catholic School handyman and competes on the Bears soccer team.

“I just want to be out there and doing as many positive things as I can do,” said Gonzalez. “I really enjoy lifting everyone’s spirits by building things, keeping up the grounds and I really like being able to help my fellow students in projects that they are involved in. I love coming up with ideas that can help.”

Gonzalez, the son of Kim and Joseph Gonzalez, attended a Senior Leadership Workshop at Trinity University in San Antonio in which he served as a Junior Counselor.

It was fun learning about leadership skills and how to be an example to other students.

“It really helped us as far as getting ideas about how to boost student involvement,” said Gonzalez. “I’m looking forward to the Student Council Spring Convention at Ford Park in Beaumont that’s coming up soon. We gain a lot of ideas from schools across the area and build relationships with them.” 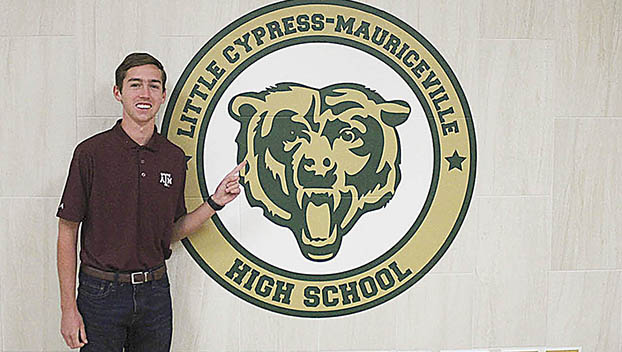 He is known for displaying a youthful energy in everything he does.

“He’s constantly involved in something it seems like 24/7,” said Smith. “He’s been such a strong force in student council activities since his freshman year. He gives off so much positive energy, and his friends and classmates certainly notice it.”

Where Gonzalez has a ton of fun is in welding, taught by long-time instructor Ricky Viator.

Gonzalez said it teaches students how to do it right and not cut corners.

“He’s constantly coming up with fun projects,” said Gonzalez. “It’s not all about welding, either. We just completed a new shed for our tennis team that will go out near the new tennis courts behind the home side of the football stadium.”

During the summer months and on weekends Gonzalez stays busy at the school he grew up in — St. Mary Catholic School.

“St. Mary’s, that’s where my heart always is. I loved going to that school, so many great memories and great people. I’m really blessed to say that I went there,” said Gonzalez.

“I really do whatever they ask of me. I enjoy keeping up the grounds, sprucing the area up to where everything looks nice. If they need some maintenance work done, I can do a lot of it, too. The most important thing to me is that I feel like I’m giving back to a school that gave me so much. I have always liked that one motto at St. Mary’s that says ‘Enter to learn, exit to serve’ and I always want to stand by that.”

Gonzalez also finds time to be a major contributor for Bears soccer.

He fell in love with the game at age 8, playing in the Orange Youth Soccer League. “We always seem to have a good soccer team, and I feel we’re going to have another good season,” he said. “I have a blast with all of my teammates. In soccer, there is a lot of running and I play right midfielder, which is one of the positions that runs the most. I always have to be on my toes, whether it is on offense or defense.”

Gonzalez keeps himself entertained at home inside his family’s workshop.

He likes to build things.

“I’ve got a few projects going and I’m currently starting to get into wood working,” he said.

“I just found that I have been accepted at Texas A&M. It’s a place I’ve always had my heart set on. I want to pursue a career in mechanical engineering, and A&M has one of the best programs in the country. I’m really looking forward to going there.  Now that I got accepted, I just want to have fun with my classmates here at LC-M. There are still a lot of fun things ahead.”