Little Cypress-Mauriceville, Splendora 10-4A Division I contest settled in the early going 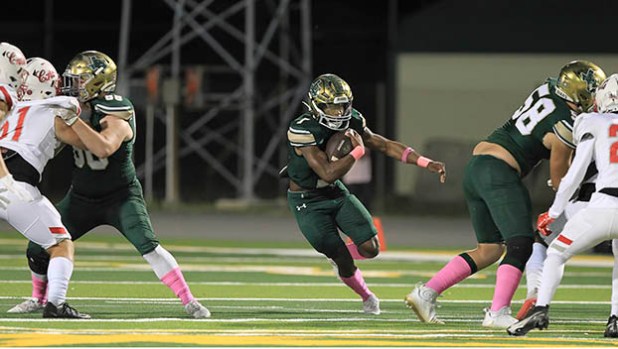 LC-M running back Da'Marion Morris cuts it up the field against Splendora. Morris scored three touchdowns and rushed for 160 yards on seven carries. (Mark Pachuca/Orange Leader) 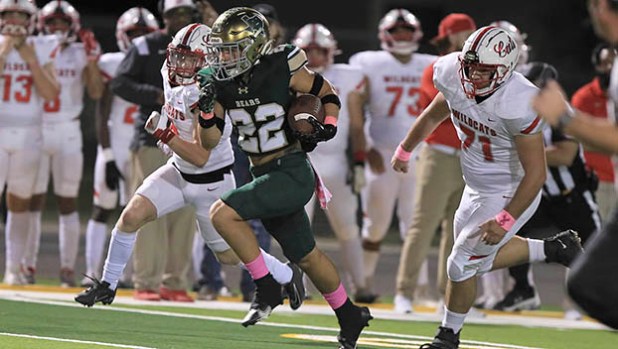 The Bears, behind the running of standout senior tailback Da’Marion Morris, raced out to a 41-9 halftime edge to cruise to a 55-9 victory.

Morris had 160 yards and three touchdowns on just seven carries in the first half.

With the game in hand before the second half, the Bears finished with 356 total yards while the Wildcats had 163.

“Just like we did at Livingston last week, we came out and got off to a fast start,” said LC-M coach Eric Peevey. “We set the tone when Da’Marion got loose on the first play of the game. Defensively, we limited them well and didn’t let them get their passing game going by applying a lot of pressure. It was a nice win for us for sure, which sets up a big one in Lumberton next week. We’ve got to go back to work and try to figure the Raiders out because they are rolling.”

“I told Da’Marion after his last big touchdown run to sit his helmet down, that we need him healthy the rest of the way,” said Peevey. “He was phenomenal again tonight and our offensive line opened some nice holes for him. Reynolds threw the ball well, even though we didn’t have to throw it much. He and Garlaska really have a connection going now.”

The Wildcats had just 55 yards rushing on 32 carries. Running back Dominic Rodriguez finished with 52 yards on 13 carries.

The Bears wasted no time getting on the board when Morris hit a hole along the left side and outsprinted the Wildcat secondary for a 56-yard touchdown run on the first play of the night. Lucas Wright booted the extra-point, putting the Bears up 7-0 with 11:47 in the first quarter.

LC-M utilized a short field on their series to hit paydirt again, going 45 yards in three plays. Reynolds hooked up with receiver Elijah Allison on a 15-yard pass to get to the Wildcat 25. Reynolds then found Garlaska on a short pass on the left side and Garlaska did the rest, hitting the left sideline for a 25-yard score, pushing it to 14-0 with 8:20 in the first quarter.

The Wildcats got on the board with 2:42 in the first quarter when a snap sailed over Reynolds’ head and out of the end zone on a punt attempt as Splendora settled for a safety, trimming it to 14-2.

The Bears had another quick three-play scoring drive, this time from 44 yards. Garlaska started it with a 14-yard end around. Morris then went up the middle for 10 yards and the speedy senior back capped it with a 20-yard touchdown dart around the left side, making it 21-2 with 11:51 in the half.

The Wildcats retaliated by hitting on two big plays in going 65 yards. Facundo hit Montero over the middle for a 31-yard strike to the Bear 34 and Rodriguez finished it when he went off the right side and outran the Bear defense for a 34-yard touchdown, cutting it to 21-9 with 11:18 in the half.

Morris displayed more magic the next time the Bears had it. He took a handoff from Reynolds deep in the backfield and looked as if he was bottled up, but he broke free, got loose down the left side and cut back up the middle for a 69-yard touchdown gallop, upping the lead back up to 28-9 with 10:54 in the half.

Jonah Fuller picked off a Facundo pass at the Bear 24 and returned it all the way back to the Wildcat 38. Two plays later Reynolds threw a dart over the middle to Garlaska, who turned it into a 40-yard touchdown catch, making it 35-9 Bears with 8:22 in the half.

After holding the Wildcats on fourth down at the Splendora 34, the Bears found the end zone again nine plays later. Reynolds connected with tight end Jordan Pollock on a nine-yard pass on thrird-and-8 that got to the Wildcat 5. Jonah Fuller, who had 25 yards on seven carries on the series, capped it with a tough three-yard touchdown run up the middle, upping it to 41-9 with 4:04 in the half.

Reynolds completed 5-of-7 passes for 96 yards in the first half with Garlaska catching two for 65 yards.

Facundo completed 5-of-10 passes for 68 yards in the first half with Montero hauling in three of them for 63 yards. Rodriguez had 40 yards on eight carries. The Bears limited the Wildcats to just 18 yards rushing on 16 carries in the half, sacking Facundo three times.

The Wildcats fumbled away the kickoff to start the second half at their own18. The Bears scored five plays later when Fuller scored from two yards out, going off right tackle, making it 48-9 with 8:52 in the third quarter.

The Bear second team offense put together a nice 11-play, 70-yard drive to put the Bears on the board again. Backup quarterback Williams Payne had 48 yards on six carries on the march and tailback Daunte Greer finished it off with a five-yard touchdown dart around the left side, pushing it to 55-9 with eight minutes remaining.

The Bears will head to Lumberton next week for a crucial showdown with the Raiders while Splendora returns home to face Livingston.