West Orange-Stark, Jasper go at it in District 9-4A D2 showdown 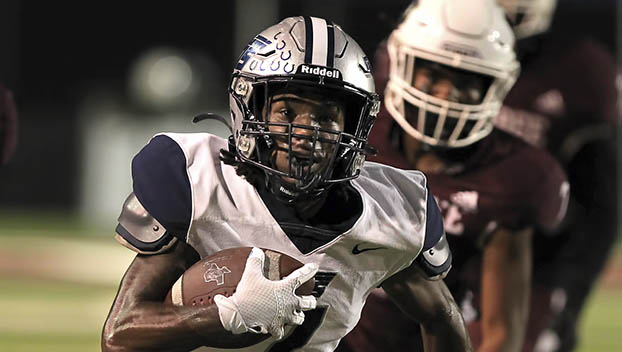 WO-S return man Dakarion Judge had another big return for a touchdown against Jasper, returning a kickoff 75 yards for a score. (Mark Pachuca/Orange Leader)

The West Orange-Stark Mustangs’ rocky campaign continued on Friday night with a road loss to the Jasper Bulldogs, 34-14.

“We’ve just got to get better,” Mustangs head coach Hiawatha Hickman said postgame. “We’ve got to be able to win big ball games.”

West Orange-Stark received the opening kickoff, but were quickly forced to punt it away. On their second possession of the night, a bad snap bounced off the shoulder of quarterback Marcus Turner Jr. and was recovered by the Bulldogs at the Mustangs’ 46.

After eight plays, Jasper quarterback Zikeice Simmons rolled out of the pocket and scrambled for a 4-yard touchdown rush, putting the Bulldogs ahead, 7-0, with five minutes left in the first quarter.

West Orange-Stark managed to get their offense rolling in response. They strung together an 11-play drive, only reaching third down once. Jalen Gilmore crossed the goal line on a four-yard run, and the Mustangs tied things up at 7-7 to end the first quarter.

Giving up big plays has been an issue plaguing the Mustangs in losses this season — Jasper exploited that weakness to begin the second quarter. Simmons unleashed a long pass downfield to wide receiver Britain Simmons, who hauled it in for a 54-yard touchdown. The Bulldogs pulled back ahead, 14-7.

The Mustangs next scoring chance presented itself just before halftime. They pushed downfield, driving inside the Bulldogs 20. However, passes on second and third down fell short, and an attempt into the end zone on fourth down was broken up by the Bulldogs defense. Heading into the break, West Orange-Stark trailed, 14-7.

Jasper received the second-half kickoff, and the Mustang defense held their opponent in check. However, the ‘Stangs offense then went three-and-out, giving the ball right back. The Bulldogs would later score on a five-yard touchdown rush by Zikeice Simmons, extending their lead to 21-7.

West Orange-Stark fired right back on the ensuing kickoff. Standout returner Dakarion Judge took the kickoff 75 yards to the house for a special teams touchdown, bringing the Mustangs back within 7, 21-14.

The third quarter continued without much significant action until around the three-minute mark, when Zikeice Simmons showcased his rushing ability with a 26-yard score. The PAT was no good, but Jasper surged further ahead, 27-14.

The Mustangs began a drive from their own 20, but Turner Jr. was intercepted by Britain Simmons around midfield to end the third quarter. The Bulldogs were unable to capitalize on the turnover, turning the ball over on downs in Mustang territory.

While West Orange-Stark’s offense didn’t look terrible in the contest, they certainly didn’t look good, either. The squad struggled to consistently convert on third and fourth down situations, another trend that has shown up in losses this season — particularly when facing strong defenses. Jasper forced a key stop on fourth-and-medium with six minutes remaining in the fourth quarter, nearly extinguishing any hopes for a Mustang comeback.

The Bulldogs ran the clock down until just 1:33 remained in the game, then scored on a 19-yard screen hauled in by Raja Garza-Adams. They would go on to beat West Orange-Stark, 34-14.

The Mustangs fall to 4-4 overall and 2-3 in 4A-II District 9. They’ll look to finish 3-3 in District 9 play next week in their regular season finale versus the Hardin-Jefferson Hawks. The game kicks off at 7:30 p.m. in West Orange.