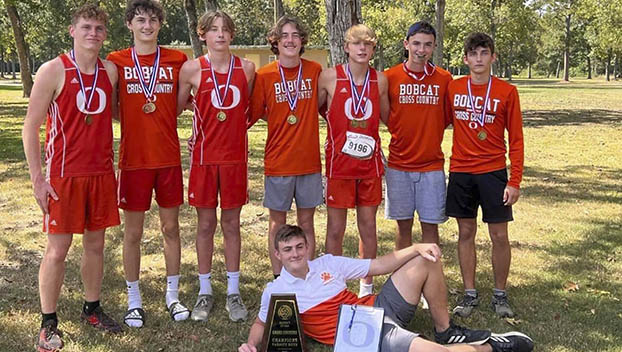 The Orangefield Bobcats stormed to the District 22-3A Cross Country team title for second-year head coach Connor Wilbur and will look to have a strong showing at the Class 3A Region III Championships in Huntsville next Thursday. (Photo courtesy Orangefield Cross Country)

It’s been a tremendous season of progress from the opening meet to the District 22-3A Meet last week.

The experienced Bobcats stormed to the district team title, while the young Lady Bobcats earned third place as both units are participating in the Class 3A Region III Cross Country Championships Oct. 25 in Huntsville.

“Winning district was huge for the guys,” said Wilbur. “We thought we had a shot going in, and the kids performed so well and continue to lower their times. The girls, what can I say, I couldn’t be prouder. We have three freshmen on the team, and the whole team really began to excel late in the season, getting personal records nearly every week.”

“We have four seniors on the boys team, and those guys know what it is all about,” said Wilbur. “They qualified as a team last year when we were still in Class 4A. They have made tremendous progression. At the beginning of the year, everyone was hovering around that 21-minute mark, and now we have three that pretty much consistently run under 19 minutes. That says a lot when you can improve anywhere between two and two and half minutes during the course of a season.”

Wilbur has also enjoyed the consistency.

“That’s why I thought we had a chance at district because we are so balanced and could step up as a team and pull it off,” said Wilbur. “During the season we’ve had four different guys that finished at the top for us. They all finish fairly close together, and you know, that really helps as far as winning team trophies.”

“We were thrilled with the girls’ performance,” said Wilbur. “You could just see them grow each week and gain confidence. We kind of went in blind at the district meet. We usually don’t see many of our district teams in the races and events that we are in around here. The kids answered the bell. Some of our boys know what it feels like to go on a regional trip, but for the girls, it’s going to be new and exciting. We’re looking forward to seeing what we can do.”