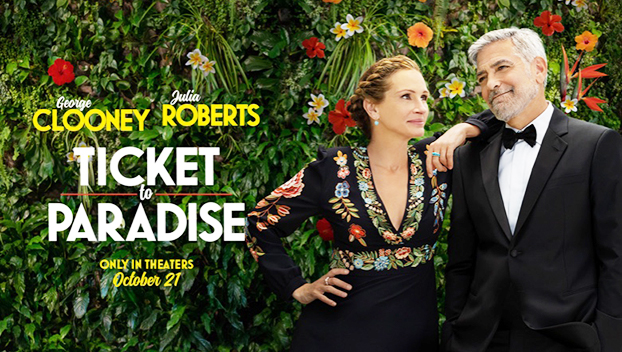 The new movie “Ticket to Paradise” is a romantic comedy about a divorced couple putting aside their animosity and coming together in an attempt to break up their daughter’s upcoming wedding.

That’s the basic plot, but the real story here is this is a movie that stars Julia Roberts and George Clooney.

For many audiences, those names alone will be enough to get them excited about seeing this movie. Who could blame them?

Clooney and Roberts have legions of adoring fans who will want to see their silver screen idols in a light-and-frothy island comedy.

Yet despite having these highly charismatic actors in the film, “Ticket to Paradise” seldom lets its stars truly shine. Much of this comes because the characters are supposed to be bickering during most of the story, but the final result is a film that feels duller than expected.

You know you have a problem when the end credit outtakes are more enjoyable than anything that happened during the course of the movie.

“Ticket to Paradise” is a bit of a disappointment, but it’s not a complete misfire.

Heaven knows Clooney and Roberts are likable enough to make any movie enjoyable. That star power is on ample display here, especially during a drunken beer pong and dance sequence that’s an absolute hoot.

It would have been easier to embrace this film had there been more of these moments.

I did enjoy several of the smaller characters who made an impression despite being overshadowed by Clooney and Roberts’ star power. Kaitlyn Dever, playing the daughter, and Billie Lourd as her best friend are quite fun, while Maxime Bouttier as the fiancé has the right amount of earnest soul and obvious physical appeal to make audiences swoon.

The other swoon-inducing element is the Bali Island setting. Okay, I know that it was shot in Australia, but the setting is still filled with gorgeous sunset on the beach sequences that will take your breath away.

All of which would seem to make a winning combination, but the script doesn’t quite work. In addition to forcing the actors into an awkward bickering mode, the overall plot is very predictable and the zany comic moments are quite mild.

Aside from the beer pong sequence, there’s very little that stands out in this story.

Mild humor isn’t bad, per se, but it’s indicative of a film that has many likeable elements, but never quite rises to the level of greatness. It may be a “Ticket to Paradise,” but the stars seem to shine a little duller than expected on this trip.