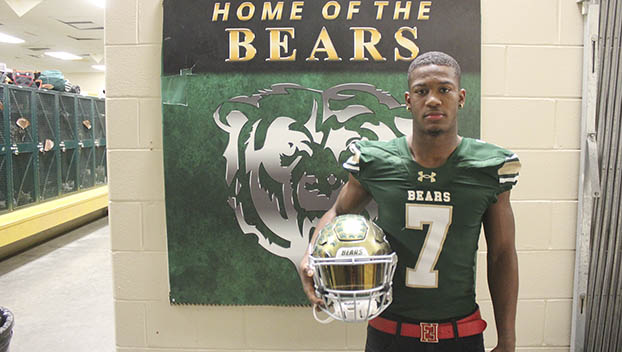 LC-M senior running back Da’Marion Morris has done a little of it all for the Battlin’ Bear football program as he sprints past defenders on offense and takes away the ball from opposing receivers on defense.(Van Wade/Orange Leader)

LITTLE CYPRESS – The closer it gets to Halloween, many people tend to have nightmares.

Morris, a senior, has been such a key figure for the Battlin’ Bears over the last several seasons that you could actually call him their “bell cow.” He certainly always answers the call.

Morris has starred on both sides of the ball. Known for his elusive skills as a running back and receiver, he also shines in the defensive secondary and on special teams.

“When I get on the field, I want to make a difference in helping my teammates and coaches win,” said Morris. “I will always do what is asked of me. If they want me to play a whole game, I’ll do it.”

So many fans kicked back and enjoyed Morris and the Bears jaunt through last season in which LCM made the fourth round of the playoffs for the first time since 1997. All Morris did was run for 1,811 yards and 22 touchdowns and caught 36 passes for 434 yards and two scores through 14 games.

This season Morris has poured out 886 yards and 15 TDs and has 380 yards receiving through seven games.

“It’s been another pretty good year, but most of all, I want our team to succeed,” said Morris. “We’re a younger team this year, but I see improvement every week. Our offensive line is younger. We’ve got a couple sophomores that have stepped in an played well. I just like getting my teammates pumped up and get their juices flowing.”

Morris’ juices have always flowed. He’s not too far away from 5,000 career all-purpose yards . He has 2,886 rushing yards, 940 receiving yards and over 600 yards returning kicks.

“Wow, I didn’t realize that,” said Morris. “That certainly wasn’t all me. I’ve had some great teammates that helped me get to this point, especially the big guys on the offensive line. Hopefully I can keep on producing and help get us some more wins.”

LC-M coach Eric Peevey said Morris knows the game well and is one of those players who rises to a different level in big situations.

“He has that great smile that everyone loves, but he has a little ‘pit bull’ in him,” said Peevey. “He definitely has the speed and the elusiveness to stroll by you, but he isn’t afraid to run over people, too.” 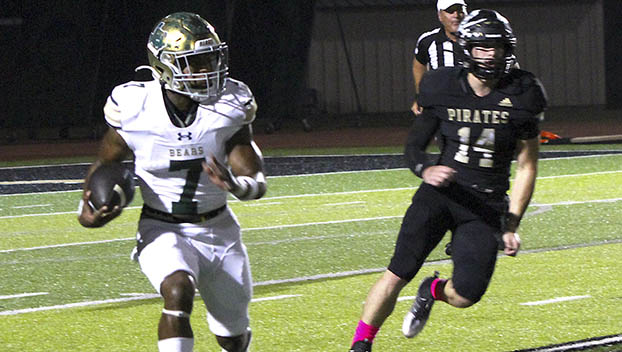 Running back just comes natural for Morris, who was also named 2022 Homecoming King.

“I grew up playing running back in junior football and junior high and that’s where I was able to pick up on some moves,” said Morris. “I was moved to receiver my freshman and sophomore years, so I learned a lot as far as running routes and how to get open in certain situations. That really helped me when I went back to running back my junior year. Playing receiver did give me an understanding on how to see the entire field better. Running back, though, is where I feel natural.”

Morris has always been swift, but it was his power and strength that started to show through by the time he was a junior.

“Coach Peevey came in last year and installed an excellent summer workout program, which was huge. We all have gotten so much stronger,” said Morris. “I also have a personal trainer woh has helped me a bunch, too, with my moves. We do things like ladders and run through cones a lot.”

“I’ve always looked at the way McCaffery has played. He is so versatile, and that’s the type of back I want to be,” said Morris. “He’s really quick and elusive. I’ve watched a lot of his highlights and I like to try and copy that.”

Another item of business Morris loves is starting at cornerback on defense. He usually is the one who locks in on the opposing team’s best receiver.

“I take a lot of pride in playing defense, and playing in the secondary, you can never let up,” said Morris. “You’ve got to be able to read your keys, look into the receiver’s eyes at times, look at how he stands, you can gain a lot of knowledge in what they are trying to do.”

Morris played huge in the Bears’ 35-12 win at Livingston last week. He had nearly 200 yards of total offense and scored all five of LC-M’s touchdowns in a much-needed win. It improved the Bears to 4-3 overall, but more importantly 1-1 in district play.

“We felt our backs were against the wall, so we came out and made a statement early, which is what we need to do each week,” said Morris. “We’ve got Splendora coming in here Friday. We can’t look past them. We should be fired up anyway with this just being our second home game.”

Peevey has liked the way Morris has matured as a senior leader and how he has become an excellent student.

“Da’Marion has been so much more vocal this year and he was up here all summer, never missed a workout, and was constantly pumping all of the kids up,” said Peevey. “He can be a jokester, too. Not many people know that about him. He is doing great in the classroom with a grade-point average over 3.0. We don’t have to coach him up much. He tends to be the hardest coach on himself. As soon as he sees a mistake, he wants to correct it immediately. He’s just a kid that loves the game so much and always willing to do the things to get better.”

Morris definitely wants to pursue college football and has received numerous letters inquiring about him.

After football season, Morris will zip over to the gym asthe  point guard of the Bears basketball team under coach Brad Jeffcoat. The Bears had a huge season on the court last year, and Morris is ready for that challenge again.

“This year I think we have a chance to be great,” said Morris. “It’s going to be great to hit the court with those guys again. I think we’ll be able to challenge anybody.”

“Last year was so full of excitement, from the team, from the coaches and from the fans,” said Morris. “Our fan support has always been great, and we really want to reward our fans again for being there for us. We still have some work to do. That starts with our game Friday night. I know the crowd will be there. They’re excited to have another home game, and I am too. Hopefully we will give them some highlights.”