Gavin Pollock took 3 years off after concussions, now shares why he came back to help supercharge Orangefield 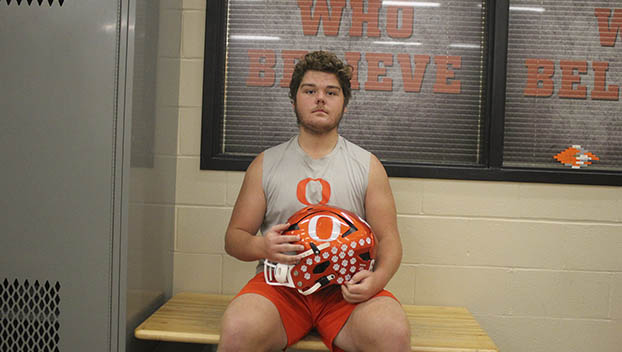 Orangefield senior strong tackle Gavin Pollock has made an impact in the offensive trenches for the Bobcats after not playing the game since junior high. (Van Wade/Orange Leader)

ORANGEFIELD – Finding his place nicely, Orangefield senior strong tackle Gavin Pollock is just proud to be back in the game of football.

Pollock played in junior high but suffered concussions in seventh grade and eighth grade and had not played since. But something pulled him back.

“I really had no intentions to play after junior high,” said Pollock. “I was under concussion protocol as a freshman. I really didn’t care about playing as a sophomore or junior. It wasn’t that I was scared, it just made me nervous, going back out there after what I had been through. I was just going to stick with baseball.”

Pollock decided to play again when the Bobcats started their offseason program in the spring.

“We had lost every single one of our starting linemen from last year and I felt I could really help the team by getting back in,” said Pollock. “It had been awhile but I felt I could contribute. It was like I had to re-learn everything. I found out pretty quickly that there was a big difference from playing junior high ball to stepping out their on varsity on Friday nights. It felt like everything comes at you at 100 miles per hour.”

Long-time Bobcats head coach Josh Smalley was thrilled when Pollock made the decision to come back and play.

“He’s got a big frame and we knew he could be a big plus for us as soon as he got back into the game and started figuring things out,” said Smalley. “I knew what he went through in junior high, and that was so tough on him. That kind of thing is not easy to overcome. He worked hard in the offseason and since he stepped on the field for the first time again Aug. 1 in our first practice, he has been so steady ever since. He’s doing a great job.”

Pollock doesn’t look to be a leader on the offensive front. He just wants all the guys in the trenches to do well.

“It feels kind of weird being the only senior in there, because when you look at it, all of those younger guys have more football experience than I do,” expressed Pollock. “I just feel really good about being part of something special. Everyone knew going into the season that the offensive line would be the big question mark, but we knew we could do it. I look back to that first scrimmage with LC-M and then now and we’ve showed so much progress.”

Progress would be an understatement, especially since the Bobcats (6-2, 4-0) started District 10-3A Division I play.

In four district battles, Pollock and his line mates have enabled the Bobcats to amass a stunning 1,718 yards on the ground, which averages out to 428.5 yards per district contest. They had 528 yards rushing in a 61-7 win over Hardin last week.

“We are really rolling good right now,” said Pollock. “I think, as a group, our first really good all-around game was against Shepherd in non-district. Then it all seemed to kick in when district started against Buna. When district starts, that’s when you want to have everything figured out and we have for the most part. We’ve been able to open the playbook some more, which really gave us more confidence.”

Smalley said the coaches are extremely proud of the offensive line group.

“They worked their tails off and I think they all wanted to prove something: that they could play well on Friday nights,” he said. “They got their feet wet early in scrimmages against LC-M and Silsbee and throughout non-district. Now they see all of that work and learning techniques and schemes really pay off. They have been dominant ever since district started.”

Dischler has already rumbled for 1,613 yards and 17 touchdowns while Perry-Koci has cut loose for nearly 600 yards.

“When you have backs like we have, it just takes a little hole here and there and they can go all the way to the end zone,” said Pollock. “What’s fun is opening one of those big holes where there is nothing but open field and they can see it before they hit it. We also played well at Anahuac, where the yards were tougher, but we opened up enough holes to get long drives going. That was a huge win.”

Pollock and the Bobcats have their bye week this week as they strive for something that has not happened in Orangefield since 1988 – an outright district title.

The Bobcats host Kirbyville Oct. 28 before closing the regular season with a tough road trip to Winnie to face East Chambers.

“We just have to stay on course and continue to work hard. There are always things we can improve on. Coach Smalley stresses that at every practice, and no team is ever perfect,” said Pollock. “Winning a district championship is definitely our goal. It would be awesome to be able to say I was part of a senior class that won district for the first time in a long, long time. Really, I’m just happy that I’ve been able to be part of something special already. It’s great to be back.”

Smalley is glad that No. 66 is back in the mix.

“I’m so happy for Gavin and what he is accomplishing,” said Smalley. “He was a good cheerleader in the stands for us the last few years and we all knew he was there and we appreciated that. Now he is getting a first-hand look at how emotional and fun the game can be again. I’m just so proud of him.”