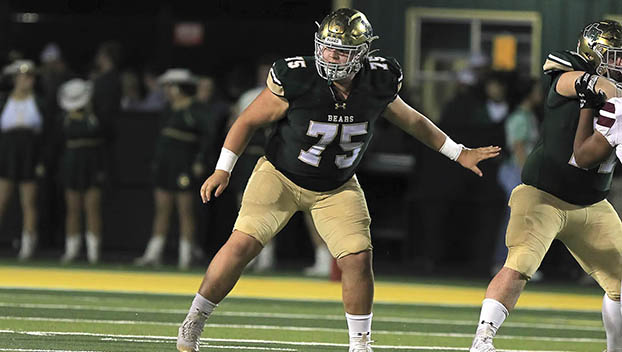 LITTLE CYPRESS – After snagging a critical 35-12 victory over the Livingston Lions to even up their District 10-4A Division I record, the Little Cypress-Mauriceville Battlin’ Bears look to bottle up the Splendora Wildcats in the friendly confines of Battlin’ Bear Stadium Friday night.

The win over Livingston helped the Bears (4-3, 1-1) going into this week’s battle.

“The Livingston game was a must-win situation for us because our backs were kind of against the wall after our tough loss to Vidor,” said LC-M coach Eric Peevey. “It’s never easy to play there, but our kids went over and were fired up. We executed the game plan we wanted, and the kids performed it almost perfectly.”

It was a great feeling for a team that has played six of their seven games on the road this season.

“It feels good to say it, two out of our last three games are at home now, and it’s been a journey to say the least,” said Peevey. “The kids are getting pumped up, with this week being our second home game. They are ready to see all of those friendly, cheering faces. We would love to accomplish something, too. We have not put together two straight wins yet, and that’s something we’re striving for.”

The Wildcats (1-6, 0-2) come in limping. Splendora won their season opener 24-21 against Cleveland but has since dropped six in a row. They have been outscored 240-41 in those losses and have dropped district decisions to Lumberton (52-10) and Huffman (30-0).

“They have struggled with injuries and they are running a new offensive system,” said Peevey. “They are young in a lot of spots. The one thing we have noticed on film is that they play hard.”

Splendora has experience at quarterback in three-year starter Harrison Facundo, who has completed 43-of-97 passes for 572 yards with three touchdowns and six interceptions. His favorite targets are receivers Kaden Grahlfs (31-217-0), Trey Garza (10-216-1) and Russell Cash (11-96-1).

The Wildcats’ leading ball carrier is Dominic Rodriguez, who has 368 yards and a TD on 60 carries.

“For most of the season, Splendora looked like they loved to throw it, which in the past, they use to line up in the Power-I and run right at you,” said Peevey. “Last week against Huffman, they were in the Power-I quite a bit again. I’m sure they will line up in a lot of different formations against us, and we’re going to have to be ready for it.”

“We have to come out prepared and ready to go. There is no such thing as an automatic win in football. You have to go play the game,” said Peevey. “We’re starting to see some strides, especially with our younger kids. We have 10 sophomores that are playing quite a bit that are still in the learning process. Every week they get better, so I like the direction we’re heading in.”