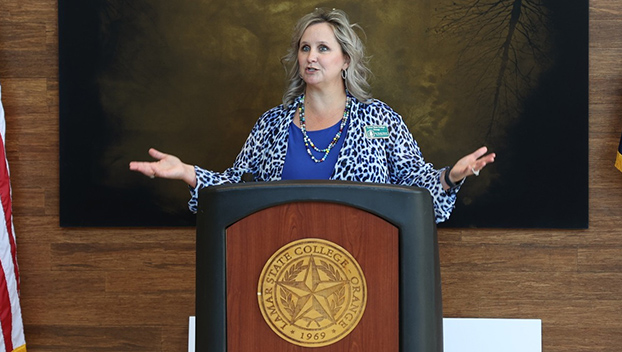 Dr. Wendy Elmore has been appointed to the statewide Industry-Based Certification Advisory Council.

Speaker of the Texas House Dade Phelan made the appointment of the Lamar State College Orange provost and executive vice president.

The Advisory Council advises the Texas Workforce Commission regarding the alignment of public high school career and technology education programs with current and future workforce needs in communities, regions and the state.

“Our Provost, Dr. Wendy Elmore, is a huge asset to our beautiful college on the Sabine and to our System,” LSCO President Dr. Tom Johnson said.

“I am thrilled that the Speaker recognizes how valuable her expertise is in the area of certifications and workforce demands and needs. She will prove invaluable to this committee and I applaud her appointment.”

The Industry-Based Certification Advisory Council is comprised of appointed representatives.

They are, as follows:

• Three members representing industry in this state, one each appointed by the Governor, the Lieutenant Governor, and the Speaker of the House of Representatives;

• Three members representing public school teachers who teach career and technology education courses or public school administrators, one each appointed by the Governor, the Lieutenant Governor and the Speaker of the House of Representatives;

Three members representing a public junior college, public state college or public technical institute, one each appointed by the Governor, the Lieutenant Governor, and the Speaker of the House of Representatives.

The members of the advisory council serve staggered four-year terms, with the terms of either four or five members expiring Feb. 1 of each odd-numbered year.