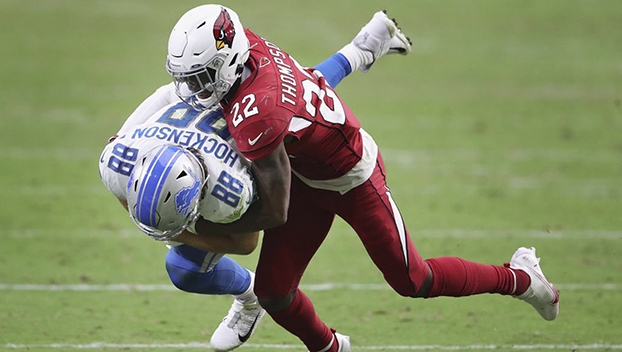 Former West Orange-Stark great Deionte Thompson (22) was recently signed by the Jacksonville Jaguars to their practice squad after playing with the Arizona Cardinals since 2019. (Leader file photo)

Thompson was originally drafted by Arizona in the fifth round (139th overall) of the 2019 NFL Draft and played in 44 games (six starts) with the Cardinals from 2019-22. His career totals include 46 tackles, four special teams tackles and three passes defensed.

An Orange native, Thompson attended the University of Alabama from 2015-18 and won two College Football Playoff National Championships (2015 and 2017). In 2018, as a redshirt junior, he earned First-Team All-SEC honors after totaling 78 tackles and two interceptions.

Thompson was a key stalwart for the Mustangs, especially his senior year where he starred at receiver and in the secondary. And he was a beast in the return game.

As a senior in 2014, the Mustangs advanced all the way to the Class 4A Division II State Championship Game, where they fell to Gilmer.

Thompson had a huge 95-yard kickoff return in the state semifinals against Sinton that helped seal the deal for WO-S, igniting them into the Championship Game.

A ball-hawk in the secondary, Thompson had 15 career interceptions with the Mustangs and was the Most Valuable Player on the 2014 All-Orange Leader Football Team.

Thompson was recruited heavily out of high school and chose Alabama over the likes of LSU, Stanford, Texas, Texas A&M and USC.