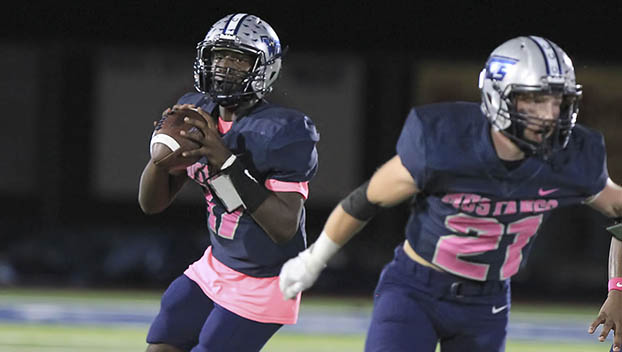 WEST ORANGE – Heading down the most important stretch of the season, the West Orange-Stark Mustangs face a stiff road test at Jasper this week in District 9-4A Division II action at Bulldog Stadium.

The Mustangs (4-4, 2-2) are looking to make a push towards the playoffs and secure one of the upper seeds, while Jasper (5-2, 3-0) is rested coming off the Bulldogs bye week.

The Mustangs racked up 354 total yards, 198 on the ground and 156 in the air. Meanwhile, the Mustangs defense limited the Cardinals to 89 total yards.

“It was a solid win for us after dropping a tough one on the road at Hamshire-Fannett the week before,” said Mustangs coach Hiawatha Hickman. “We were able to work on a few things against Bridge City and get them right. Defensively, we flew all around and we better be able to do that this week.”

Hickman said Jasper is “rested, healthy” and waiting on the Mustangs.

“We feel like we know what each other wants to do,” said Hickman. “We both have so much film on each other. It’s a big game for us, as far as seeding goes for the playoffs. If we can win by more than five points and Silsbee beats Hamshire-Fannett and Silsbee, we can get as high as the No. 2 seed.”

The Mustangs are looking to move the ball against a very aggressive Jasper defense, which Hickman said is better this season then in 2021.

“They really like to apply the pressure and they fly to the football,” he said. “We have to get a great effort from our guys up front. Marcus Turner Jr. keeps improving every week at quarterback. Jasper likes to play a lot of man-to-man, so if we can give Marcus some time, he could hit our receivers in some open space.”

For the Bulldogs offensive, quarterback Zikeice Simmons is the player that stirs the drink, doing it all.

Simmons has completed 103-of-193 passes for 1,452 yards with 18 touchdowns and eight interceptions. He also leads the Bulldogs in rushing with 631 yards and three touchdowns on 105 carries.

“He makes everything go for them and is a tremendous athlete that can air it out or get loose on you with his scrambling ability,” said Hickman. “It’s a different Jasper attack this year. They like to fling it a lot more then they run it. We have to hone in on Simmons, for sure, put a couple spies on him and not let him single-handily hurt us. We have to stay in our passing lanes.”

Simmons’ favorite target is receiver Britain Simmons, who has hauled down 38 receptions for 616 yards and eight TDs. Camryn Adams has 26 catches for 390 yards and four TDs, and Raja Garza-Adams has 12 grabs for 151 yards and three scores.

Zykeeden Hadnot is the Bulldogs second leading rusher with 205 yards and three TDs on 42 totes.

Hickman feels this is a huge test for the Mustangs, going into a hostile territory in Jasper.

“The Jasper kids are going to be amped up, especially after they were off last week,” said Hickman. “Our kids, we need to go in there and match their intensity. It should be another great game. There is a lot of history in this rivalry, and hopefully we can go in there and get one.”