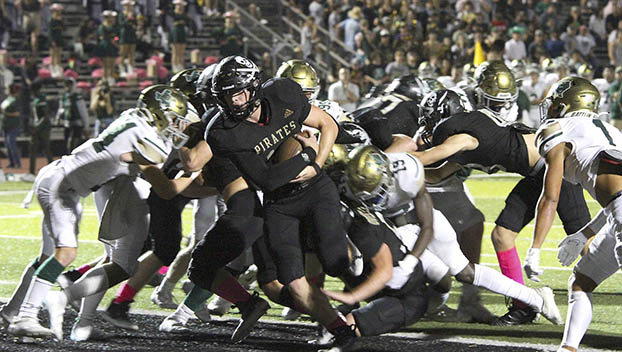 VIDOR – After absorbing a tough 47-21 District 10-4A Division I loss to front runner Lumberton on the road last Friday, the Vidor Pirates look to bounce up off the mat by welcoming in the Livingston Lions for Homecoming this week.

“Us and Livingston, we’re similar in so many ways,” said Vidor coach Jeff Mathews. “We both started 0-3, then we both won three straight, and now we both took a loss last week. So it’s a very important game for both us.”

Mathews felt the Pirates put forth a great effort against Lumberton, despite the loss.

“I thought our kids played hard all night. We lost a little energy when our back, Ricky Gall, broke his arm in the first quarter. We all feel for that kid, who has battled back from injury time after time the last couple seasons,” said Mathews. “We were able to cut it to 26-14 early in the third quarter, but give Lumberton credit. They kept the ball away from us. I think we ran 14 plays in the second half.”

“I’ve seen some really good teams the last few years in the playoffs when we played Lindale one year and then Tyler Chapel Hill last year,” said Mathews. “We scrimmaged Silsbee and played Lumberton this season, and all I can say is that both of them are just as good or better than the first two I mentioned. Lumberton and Silsbee are primed for a long playoff run.”

Mathews feel the Pirates and Lions are close to each other on paper.

“They like to run it a bunch, and everyone knows we do,” said Mathews. “It’s a game that shouldn’t last long. The team that gets those long sustained drives going and doesn’t turn the ball over will be the team that wins.”

The Lions are paced by quarterback Jontavian McNeal, who rushed for 534 yards and seven touchdowns on 92 carries. He has completed 29-of-58 passes for 401 yards with five TDs and four interceptions.

“The McNeal kid is a shifty athlete,” said Mathews. “You have to keep him bottled up, no doubt. We can’t let him get the edge, or he can go the distance. He also has a sneaky arm, so we have our hands full with him.”

Trenden Williams has rushed for 417 yards and two TDs on 44 carries, while Jerren James has 229 yards and a TD on 49 totes out of the Livingston backfield.

Chevy Peters is a deep receiving threat for the Lions with his 10 catches, 224 yards and four TDs.

“They have some other weapons too, McNeal isn’t the entire show,” said Mathews. “The Lions have athletes all over the field.”

Mathews said both teams are better than what they showed last week.

“Livingston had some special teams mistakes early against LC-M, giving the Bears great field position, and it got away from them early,” said Mathews. “That’s why all three phases of the game are so important. We’re looking forward to playing, because it’s a big game and our kids understand. We had a good workout Saturday, and Monday morning was great. They’ll be ready to go.”