Governor talks about fentanyl threat, how to fight it while in Southeast Texas 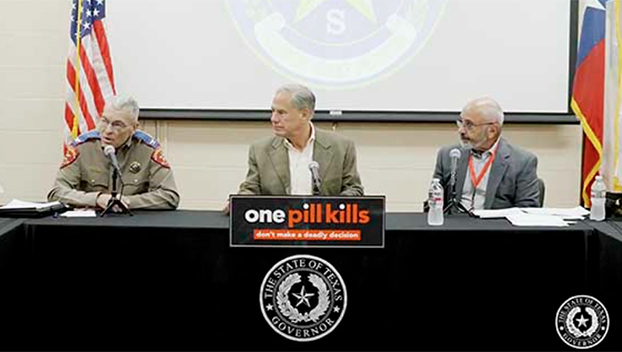 BEAUMONT — Governor Greg Abbott, joined by a multitude of state and local officials, spoke in Jefferson County Monday in regards to the new “One Pill Kills” campaign, which addresses the dangers of fentanyl.

“Fentanyl is something that is infiltrating the entire State of Texas,” Abbott said. “In order for Texas to be able to deal with it in the way that we need to, it requires collaboration at all levels of government — state, local and federal.”

“We need to all realize fentanyl is killing Texans,” Abbott said. “Last year almost 1,700 Texans lost their lives because of fentanyl. The (Drug Enforcement Administration) administrator said fentanyl is the single deadliest threat our nation has ever faced.”

“We had 65 overdoses in Jefferson County in 2021, (and) 25 of them was fentanyl,” Singletary said. “It’s coming to Southeast Texas and we’ve got to do something about it.”

Steve McCraw, director of the Texas Department of Public Safety, said fentanyl is 100 times more potent than morphine, and only two milligrams is a lethal dose.

Abbott said he is seeking two laws to fight the issue. First, he intends to classify fentanyl as a poisoning instead of an overdose.

“The reason for this…is fentanyl is laced onto other drugs that people have no idea the fentanyl is on there,” he said. “And when they take just that one drug, they lose their life. Not because they’re taking an overdose, but because it is laced with fentanyl.”

He also called to make narcan, which can reverse the side effects of the drug if administered early enough, more available to law enforcement, school districts, businesses and in other places.