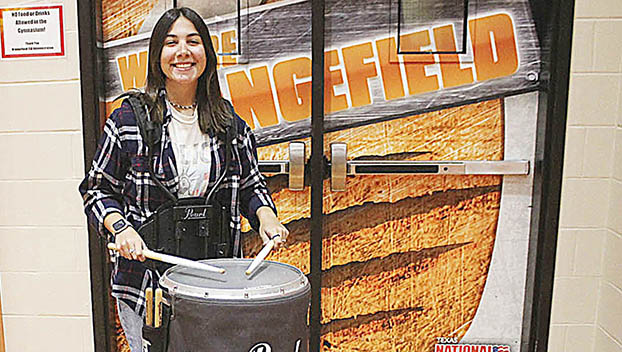 Orangefield senior Sadie Prouse is a proud leader of the Orangefield Bobcat Band as a Drum Major and is a proud music fan of all eras. (Van Wade/Orange Leader)

ORANGEFIELD — Orangefield senior Sadie Prouse isn’t afraid to represent what she loves — she’s a music buff and proud of it.

It’s not uncommon for her Orangefield classmates to see her wearing concert T-shirts from the 1980s, like The Police that she wore this week. She’s a classic rock fan and proud of it.

Prouse is such a key cog for the Orangefield Band, and the band hall is where she thrives nearly year around. She finds time to concentrate on her studies as a member of the National Honor Society.

“I wouldn’t call myself a total nerd, but I love that old style of music,” said Prouse. “I grew up with it because my parents loved it so much. It just has that style that is so unique, compared to other music eras.”

Prouse, the daughter of Carrie and Chad Prouse, grew up with music in her heart.

“I started to play the piano when I was very young, and there is nothing quite like learning different kinds of music on the piano, from classic music to soft music, I just love playing it all,” expressed Prouse. “Then I started to pick up drums and played them in church and then I knew that beating the drums is something I really wanted to pursue.”

Prouse is a Drum Major for the Bobcat Band and enjoys being a part of the drum line.

“I really love all the instruments in the band and it makes everything so complete, but there is just something about playing the drums. It makes you feel like a rock star,” said Prouse. “Nothing says high school spirit more, especially when you are at a football game and the drums start beating. It just gets everyone fired up and uplifts the whole setting around you.” 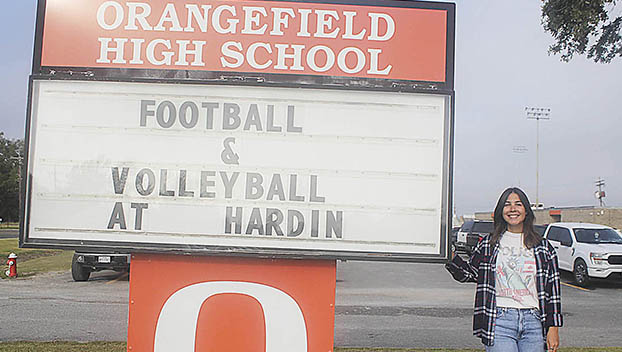 Orangefield senior Sadie Prouse has been a tremendous spirit leader on campus throughout her years in the school district. (Van Wade/Orange Leader)

Orangefield Principal Rea Wrinkle said Prouse has passion for music and displays a passionate spirit that uplifts everyone she comes across.

“She unifies kids and makes them all feel like they are part of something special,” Wrinkle said. “She really is a true leader. She is heavily involved in youth leadership at her church and comes from a great family. She’s a gem.”

According to Wrinkle, it’s students like Prouse who make band so much fun.

Band students are on campus all the time, going back to July, and work hard at what they want to accomplish.

“They have so much fun,” Wrinkle said. “I don’t think a group has more fun on Friday nights than our band students. Just a great group of kids.”

The Bobcats were excellent in a tuneup, when Bridge City hosted the Battle of the Bridges.

“We were so excited about the way we performed, everything was right on cue and we executed so well,” said Prouse. “We’ve come a long way since my freshman year. I’m really proud that we won those awards, especially edging out Anahuac, who has been so strong over the years.”

Prouse certainly takes her role as Drum Major to heart.

“I try to be the best leader I can possibly be on and off the field,” said Prouse. “I always try to give nothing but positive feedback, especially to the younger band members. I’ve been in their shoes, so I want them to learn a lot. I also want them to have the best possible experience that they can have. Band is supposed to be fun.”

Prouse aims to keep her grades high as she looks to major in music in college.

She us part of the National Honor Society and is pushing herself to earn scholarships to help with college expenses.

“I really want to attend Mary-Hardin Baylor,” said Prouse. “They have a great musicologist instructor there and a tremendous percussion section. I was able to attend a football game earlier this year, and their band is so awesome.”

It’s no surprise to learn what Prouse likes to do in her spare time.

“I love to just kick back and listen to music,” explained Prouse. “I love listening to the Beatles. I love listening to 1980s music, especially the ones where pianos are involved because it is just easy listening. One of my biggest thrills was that I got to see Paul McCartney in concert. What a moment.”

“There is just something about putting on that band uniform,” she said. “It just gives me a sense of spirit. It’s an honor to be part of something special here at Orangefield. I grew up with everyone here; a lot of other schools can’t say that. We are all so close, and I don’t think anyone else has the spirit that we do.”