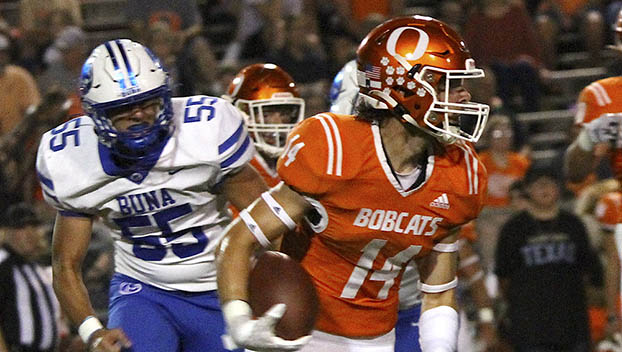 HARDIN – Just like they did to Tarkington last week, the Orangefield Bobcats strolled out to a 40-0 halftime lead and then went on to defeat the Hardin Hornets on the road 61-7 to stay perfect in District 10-3A Division I play.

Orangefield senior running back Cameron Dischler has been setting the field on fire of late and he upped the ante against the Hornets. Dischler shredded the Hardin defense for a stunning 324 yards and five touchdowns on 15 carries. The game had a running clock to start the fourth quarter. The Bobcats finished with 549 yards, 528 of it coming on the ground.

“It was another good night for the Bobcats,” said Orangefield coach Josh Smalley. “Our defense really set the tone and offensively, we were able to hit on some big plays. It’s always great when you can get a win on the road, especially in district. The kids gave a great effort. We still want to keep improving every week at this point of the season. We still need to clean some things up, we had a few too many holding penalties tonight.”

Bobcat quarterback Brayden Parker got the “scoring machine” going when he scored from nine yards out to make it 6-0.

Gavin Perry-Koci got loose on a 32-yard scoring jaunt and Case Singleton dashed in for the two-point conversion, pushing it to 14-0 with 4:38 in the first quarter.

Dischler, who had 205 yards on just 10 carries in the first half, silenced the Hardin faithful when he bolted 80 yards that really broke the Hornets’ backs, upping it to 20-0 with 1:22 in the first quarter.

Dischler got in on the act again when he shredded through the Hardin secondary for a 50-yard touchdown gallop early in the second quarter.

The Bobcats made it 33-0 with still 9:43 in the half when Parker scored his second nine-yard touchdown jaunt of the night.

Dischler added to the Hardin misery when he scored from 16 yards out with 3:20 in the half.

Perry-Koci continued the onslaught when he cut loose and headed for the end zone on a 45-yard touchdown run, making it 47-0 with 6:28 in the third.

Dischler scored yet again when he scored from 25 yards out with 3:31 in the third.

The Hornets finally got on the board to trim it to 54-7 but Dischler put icing on the cake with a 58-yard touchdown gallop with0:16 left in the third.

The Bobcats will head into their bye weeks next week and will play host to Kirbyville Oct. 28.