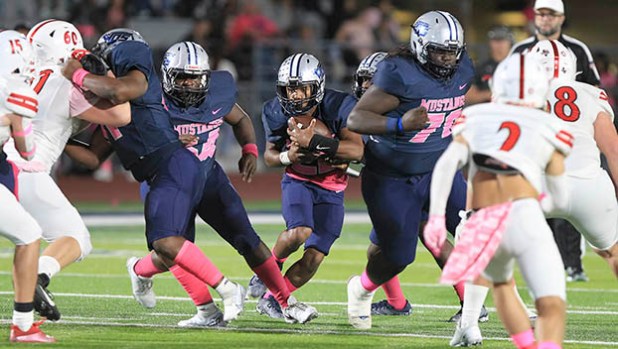 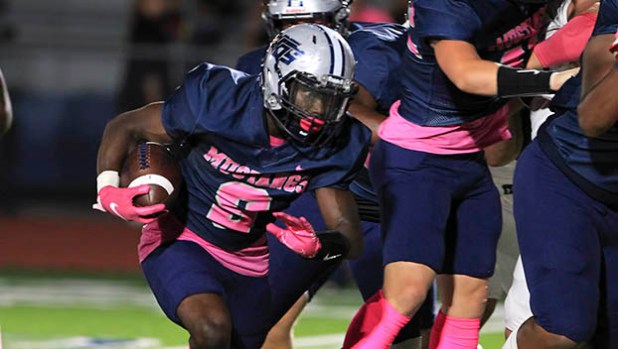 WO-S running back Jalen Gilmore turns the corner to score on a seven-yard touchdown against Bridge City. (Mark Pachuca/Orange Leader)

WEST ORANGE – The West Orange-Stark Mustangs utilized a dominating defensive performance to even both their season record and their District 9-4A Division II mark as they took down the Bridge City Cardinals 47-0 at Hooks Stadium Friday night.

“Defensively, we played our best game of the year,” said Mustang head coach Hiawatha Hickman. “People forget sometimes, but we’re still really young on defense. We held Bridge City in their territory for most of the night and our defense constantly set us up with good field position.”

Mustang sophomore quarterback Marcus Turner, Jr. completed 7-of-16 passes for 156 yards with four of the completions going for touchdowns and he also rushed for 99 yards and a touchdown on just five carries.

“Offensively, we clicked pretty well,” said Hickman. “Marcus (Turner, Jr.) continues to make strides and it’s great knowing we’re going to have him for awhile. We got some kids in open spaces tonight that gave us big plays. Judge, though, wow, he made one huge play basically on his own with the long score he had.”

The Mustang defense held the Cardinals to 93 rushing yards on 42 carries and a minus four yards passing.

Noah Broussard led the Cardinal offense with 49 yards on 17 carries.

“The Cardinals came out and played hard and we knew they came in really banged up,” said Hickman. “Credit to Coach (Cody) McGuire and his staff, they played hard tonight.”

The Mustangs lived in Cardinal territory in the first half to build a 33-0 lead by intermission.

After holding the Cardinals deep in Bridge City territory, the Mustangs took over at the Cardinal 40 with 7:37 in the first quarter.

They put together a six-play scoring drive. Turner Jr. had three carries for 26 yards, including a 17-yard jaunt. Jalen Gilmore capped it with a seven-yard touchdown dart off right tackle. Gilmore booted the extra-point, giving the Mustangs a 7-0 edge with 4:43 in the first quarter.

After starting deep in Cardinal territory again, the Mustangs zipped 45 yards in six plays to hit paydirt. Tahj Amerson rushed three times 16 yards and caught a six-yard pass on the drive. The Mustangs put points on the board when Turner Jr. tossed a quick pass to the left flat to Judge and the speedy receiver did the rest, sprinting 14 yards for the touchdown, making it 14-0 with 10:15 in the first half.

Turner Jr. electrified the Mustang faithful when he took off over the left side and went 67 yards untouched to the end zone, pushing it to 21-0 with 5:31 in the half.

Utilizing a short field again, the Mustangs found the end zone again right before the half when Turner Jr. hit receiver Crosson in stride on a deep 38-yard touchdown pass to make it 27-0 with 0:51 in the half.

The Mustangs were not quite through when Amerson scooped up a fumble by Cardinal Jemel Charles at the Bridge City 36 and returned it to the 7. On the next play Turner Jr. found Crosson again for a touchdown after Crosson caught the ball off a tip, to make it 33-0 with 0:18 in the half.

The Mustangs outgained the Cardinals 221-79 in the first half. Turner Jr. rushed for 93 yards on four carries and completed 5-of-13 passes for 74 yards with Crosson hauling in two of them for 45 yards.

Broussard led the Cardinals with 59 yards on nine carries.

On the first play of the second half, Turner, Jr. tossed a quick swing pass to Judge on the left side. It looked as if Judge was bottled up but he was able to cut it back over the middle, breaking several Cardinal tackle attempts and streaked 77 yards for a touchdown, making it 40-0 with 11:34 in the third.

The Mustangs converted on a eight-play, 52-yard drive early in the fourth quarter. Running back Isaiah Thomas had four carries for 30 yards on the march, including a six-yard touchdown up the middle, upping the lead to 47-0 with 6:27 remaining.

The Mustangs will hit the road next week in a big battle against the Jasper Bulldogs while the Cardinals return home to host the Hardin-Jefferson Hawks for Homecoming.

“It will be a big one in Jasper and it’s one we definitely need,” said Hickman. “Jasper is really good and they have some tremendous athletes, it should be a good one.”