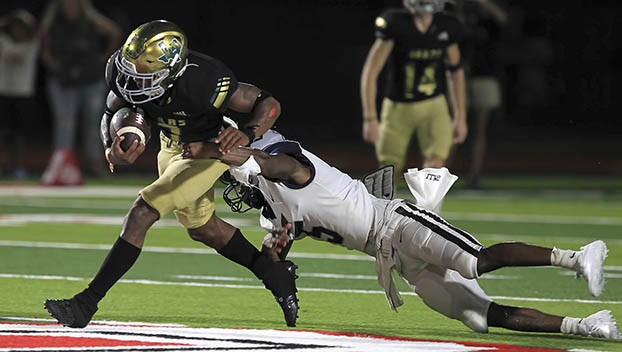 LIVINGSTON – Needing a big win on the road, the Little Cypress-Mauriceville Bears did just that as they took down the Livingston Lions 35-12 in District 10-4A Division I action Friday night.

LC-M (4-3, 1-1) running back Da’Marion Morris put his talents on display in this game, with an astounding showing running as well as receiving. Morris would account for all of the Bears’ touchdowns for the night, four rushing touchdowns and one receiving touchdown.

He also led the team in rushing with 18 carries for 121 yards, and would also lead in receiving yards with three catches for 68 yards.

Morris’ ability to cut cleanly into holes and explode past defenders kept the Lions (3-4, 1-1) on their heels all game long

.The other weapon for the Bears was quarterback Dean Reynolds, who was able to sling the ball well when they needed it. Reynolds would go 10-14 passing with 151 yards and a touchdown.

Aside from Morris, Jacob Pollock also had a great night receiving. Pollock had four catches for 51 yards, his longest going for 25.

The Battlin’ Bear defense had the bend but don’t break mentality all game long, limiting the fast Lions offense and letting their offense take the game over early.

They were able to mix up their blitzes on the mobile Jontavian McNeal at quarterback for the Lions, who had a great game but was severely limited by the Bears’ defense.

McNeal was the majority of the Lions’ offense this, rushing 23 times for 129 yardsw hile passing for 98 yards on a 6-of-11 effort.

His speed allowed him to run the run option style offense, and while they couldn’t get it working often, he was still able to put up decent yards.

The Lions got the ball to start the game, but the Bears’ defense stuffed their drive and got great field positioning early.

After starting on the Lion’s 17, Reynolds found Jacob Pollock for a quick 10-yard pass. Morris would then finish off the drive with two quick runs for the touchdown. After the PAT the Bears led 7-0 after just a minute of play.

The Bears got another stop and Morris found another rushing touchdown to stretch their lead to two scores. After a fake punt attempt, the Lions turned the ball over on downs, giving the Bears great position again.

Reynolds hooked up with Pollock again for an 11-yard pass, then Morris would take care of the rest. He would take a snap out of Wildcat and bounced to the outside and scored easily from 22 yards out. After the PAT the Bears led 14-0 midway through the first quarter.

Morris put his electric speed and good hands on display with a big touchdown reception to extend their lead even further before the half. Reynolds spotted Morris three times with quick passes, and on the third pass Morris was able to break a screen pass all the way to the house. A 57 yard touchdown catch from Morris put the Bears up 21-0 with just 30 seconds left in the first half.

The Bears’ offense continued to pump out points with another scoring drive to start the second half.

Reynolds would find Pollock for a pass of 25 yards and Elijah Allison for a 12-yard catch to set up the scoring chance. Morris capped it off with a three-yard touchdown run. After the PAT the Bears lead grew to 28-0.

The Lions found their first points late into the third quarter after getting favorable positioning from the Bears. Starting at the Bears’ 34, McNeal broke off a big 18-yard run a few plays into the drive to put the ball in the red zone. Jerrett James finished it off from five yards out and score. The PAT went wide, making the score 28-6 Bears towards the end of the third quarter.

Morris scores his and the Bears’ fifth touchdown of the night with another run. Bears would get a turnover on downs inside the Lion’s 30 and made short work of the drive. Morris scored 11 yards out. After the PAT went through the Bears lead went to 35-6 late into the fourth quarter.

The Lions got another score as time wound down in the fourth quarter, a little something to build on heading into the next week. McNeal connected on three passes,, the longest going to Chevy Peters for 25 yards and another going for 10 and a touchdown to Brayden Ethier. The two-point conversion wouldn’t make it, which made the score 35-12 with less than a minute left in the fourth quarter.

.The Bears had a big bounce back week after a tough loss in Vidor last week.

LC-M will return home to face Splendora next week while the Lions travel to Vidor.