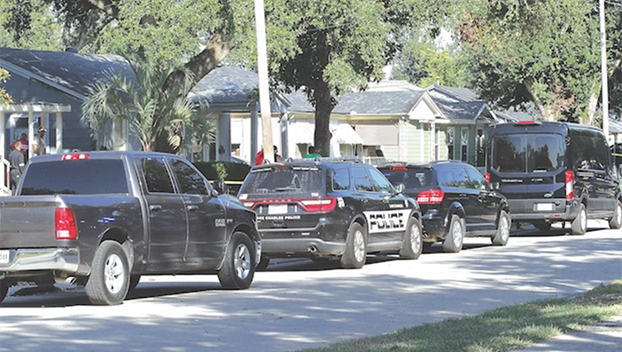 7th Street between 3rd Avenue and 4th Avenue was largely blocked off Thursday afternoon while law enforcement officials investigated three deaths. The investigation has been turned over to the La. State Police. (Donna Price / American Press)

A 911 caller reported seeing an unclothed male subject walking in a nearby yard and also reported previously seeing the subject with a firearm.

Officers arrived on scene and made contact with the subject. An officer discharged a firearm, and the subject retreated back into the home and closed the door, police said.

LCPD SWAT Officers were dispatched to the scene and after gaining entry into the home, discovered the bodies of two additional subjects, one in a rear hallway and the other in a bedroom doorway.

Detectives have been assigned the investigation into the deaths of the two victims discovered in the rear area of the residence. They are investigating these deaths as homicides as the victims were discovered with gunshot wounds.

This is an ongoing investigation and anyone with additional information is asked to contact lead Detectives Sgt. Willie Fontenot or Sgt. Joe Savoie by calling 337-491-1311.

Detectives assigned to the Louisiana State Police Bureau of Investigations were requested Thursday by the Lake Charles Police Department to investigate a fatal officer-involved shooting.

The Lake Charles Police Department Crime Lab responded to the scene and is assisting with the investigation.

No officers were injured during the incident.