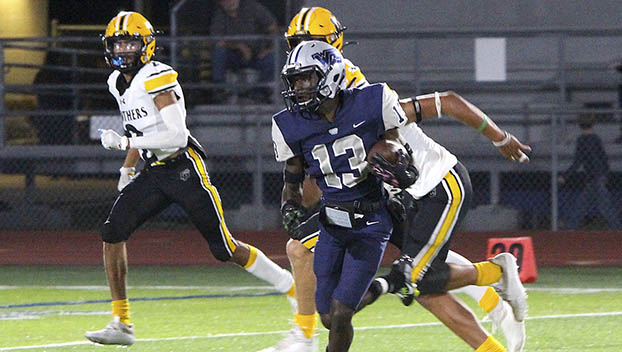 WEST ORANGE – A few plays here and there and the West Orange-Stark Mustangs could have been talking about a victory over the Hamshire-Fannett Longhorns last week.

However, that was not meant to be as the Longhorns defeated the Mustangs 26-21 in a big District 9-4A Division II games for both teams.

Now it is all about regrouping this week for the Mustangs (3-4, 1-2) as they will entertain Orange County rival Bridge City (1-5, 0-2) at Hooks Stadium.

“We simply didn’t make the plays we had too, plain and simple,” said first-year WO-S head coach Hiawatha Hickman. “We started the game off really well but we let it get away from us in the second half.”

Hickman said the loss was tough, but the Mustangs will bounce back.

“We’ve got to find a way to execute better, all the way around,” said Hickman. “That’s all on me, too. The kids’ effort is there. We’ve just got to be able to put them in better position to make more positive plays.”

Hickman has the Mustangs busy this week.

“We’ve got to cut down on the dang penalties,” said Hickman. “That really kept us behind the chains the other night, and we had a few on defense that kept Hamshire drives going. I think we had like 13 of them. You can’t afford that. It’s hard to beat good teams when you are giving away yardage for free.”

The Mustangs are welcoming in a Bridge City Cardinals team that has been shredded by injuries, but Hickman feels their neighbors will come in battling.

“The Cardinals are definitely going through a rough patch with all of the injuries they’ve had,” said Hickman. “They look so different from the team that played earlier in the season, because Coach (Cody) McGuire has had to do so much shuffling. They have a lot of young kids out there, but they battle. We know how it is. We have been playing eight sophomores a lot.”

Hickman feels the Mustangs have a lot to play for and the players realize that. The goal is to win out in the last three games and make some noise in the playoffs.

“That’s what every football team strives for,” he said. “If we take care of some things and fix them, I really believe these kids can do that.”