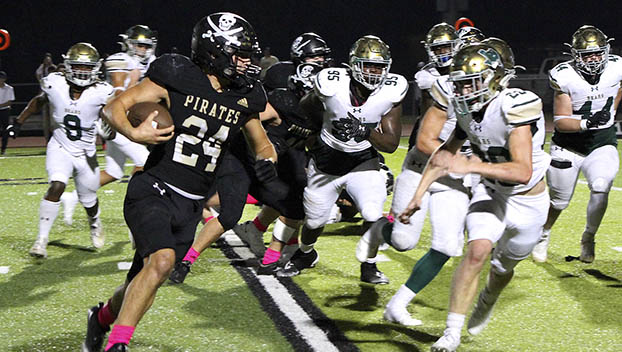 VIDOR – After a passing a huge test with flying colors in their District 10-4A Division I opener last week against Little Cypress-Mauriceville, the Vidor Pirates are looking to tame another big-time opponent Friday when they take a road trip to Lumberton to take on the high-flying Raiders.

The Raiders (5-1, 1-0) are clicking on all cylinders, sparked by junior quarterback Lucas Powell. Lumberton spanked Splendora 52-10 in its district opener last week.

“The kids were thrilled with the win over LC-M and they went out and earned it,” said Vidor coach Jeff Mathews. “We celebrated a little after that game, that’s what it was, just a little. It was back to business as usual Saturday morning though.”

Mathews is proud of the way the Pirates responded the last several weeks after starting non-district play 0-3.

“Everything has just clicked for them. It was like a little light appeared above their heads and they realized they were still a pretty darn good football team,” said Mathews. “They studied so much film before the LC-M game, and on this past Saturday, I’ve never seen them study film so hard like they are doing with Lumberton.”

The Pirates will look to slow down or at least limit the Raiders’ potent offensive arsenal.

Powell has been on fire for the Raiders, completing 89-of-126 passes for 1,499 yards and 22 touchdowns with only five interceptions. He has also rushed for 329 yards and two scores on just 39 carries.

“The Powell kid is phenomenal and is so fun to watch, unless you’re a defensive coach,” said Mathews. “He makes them go. He has one of those golden arms and is so darn accurate. He gets the ball to a wide variety of receivers. He’s also more capable this year of getting loose with his legs. You can see the confidence he has gained there.”

Trey Kersch leads the Raiders with 34 catches for 524 yards and seven TDs. Brady Fuselier is a deep threat with 20 receptions for 506 yards and nine TDs, while Kaleb Koch has 21 grabs for 307 yards and four TDs.

“Those guys run great routes, nothing fancy, they just get open, and Powell, he always finds them and hits them right on point,” said Mathews.

The Raiders also have a nice X-factor in the backfield in running back Jaddon Ward, who has ripped off 613 yards and five TDs on 91 carries.

“The Ward kid is about 5-9 and weighs around 210 pounds, and he is like a bowling ball. He runs a lot like Jerome Bettis,” said Mathews. “It’s hard to get your hands wrapped around him.”

The Pirates will look to control the clock and make the Raiders impatient with their vaunted Slot-T rushing attack sparked by the likes of fullback Jason Watson, tailbacks Daigan Venable and Dane Villadsen and quarterback Jarrett Odom.

“It’s no secret what we want to do, that’s to slow the game down and move the chains,” said Mathews. “We were able to do that against LC-M last week, where we sustained two or three of those vaunted 15- to 18-play drives that we love so much. We just have to stay ahead of the chains, avoid big penalties and turnovers. It was a great game last year and we’re looking forward to another one this year too.”

The Pirates edged out the Raiders 28-27 last season, erasing a 21-7 deficit for a comeback win.