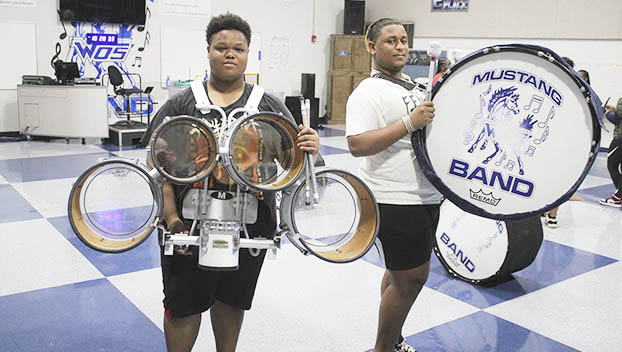 There is nothing quite like watching the marching and hearing the sounds and camaraderie that goes into a high school band.

I simply love every second of it.

Me, I was always the “jock” type in high school, couldn’t carry a tune with my voice or any type of instrument, but I always had so much respect for the effort my band classmates put forth at Little Cypress-Mauriceville back in the day.

My wife Laura, my beautiful little Bridge City “band geek” back in the 1980s, had plenty of wind, making a First Division rating at the State Solo Contest in 1985 in the bass trombone.

As a sportswriter for 30 years, I tend to miss a lot of the halftime performances, typing on my story, downloading photos and getting scores in and out from other games in the area.

That’s what made Battle of the Bridges hosted by Bridge City High School this past Saturday so special for Laura and I.

We got to see so many band kids across the area perform in somewhat of a tuneup for the upcoming Area UIL Marching Contest at Port Neches-Groves High School this upcoming weekend.

The music, marching and performances were all electric, from Class 2A Deweyville all the way up to Class 5A Port Neches-Groves.

Of course, Orangefield, LC-M and Bridge City all knocked it out of the park.

I’ve been on a lot of sports teams and covered, it seems, like a 1,000 more over the years, but there is just something about band kids that I have always set them a part.

They form special bonds that last way past their high school days.

Think about it. Counting summer band practice, band is often the only school activity that’s year around. So, unlike sports teams or the theater cast that’s close-knit for the several months, the members are together but not so much for the rest of the year. Band members are together all year, which tends to create close friendships.

The fact that band is a class as well as an extracurricular offers two advantages. One is band students get a teacher that they’ll, for the most part, have for all four years. It can be a real benefit in terms of having a school adult who gets to know them particularly well.

The other advantage is that, since their class schedule is built around band, band students tend to have other classes and their lunch period together, helping reinforce band friendships.

Band kids tend to be the kind of high-achieving, relatively well-behaved students whom a parent would want for his or her child’s social group. And peer relationships are a huge factor in whether a teen’s high school years are productive or a train wreck.

Band is unusual in that it groups all four grades together. Unlike sports, bands generally don’t divide students into freshman, junior varsity and varsity teams. That makes for a united group as kids move through their four years of high school and gives more opportunities for older kids to mentor young kids.

Incoming ninth graders who participate in summer band practice or camp before entering high school have junior and seniors greeting them in the hallways even during the first week of school.

Band is an excellent vehicle for teaching a host of skills, such as discipline, teamwork and the importance of following directions. The precision these kids work on to perfect is simply amazing.

There’s nothing like being the person who messes up a formation in a marching band competition or hits a sour note during a concert to drive home the point that every individuals contribution counts, for better or worse.

Band also is an activity where practice really does make perfect. It teaches teens that simply relying on raw talent doesn’t cut it.

But if I had an eighth grader who was worried about making friends and nervous about high school, I’d be encouraging that child to give marching band a hard look. If the child doesn’t play an instrument now, the band director likely will find a spot somewhere for that child.

As for the music? That’s the icing on the cake.

Thanks BCHS for hosting such a wonderful show, and thanks to all of the kids that blasted out all of those notes. All of you deserve so much credit for all of the work ethic, and I’m never afraid to “toot the horns” for you. Keep on rocking!