Orangefield Bobcats undefeated in district but not looking past any opponents 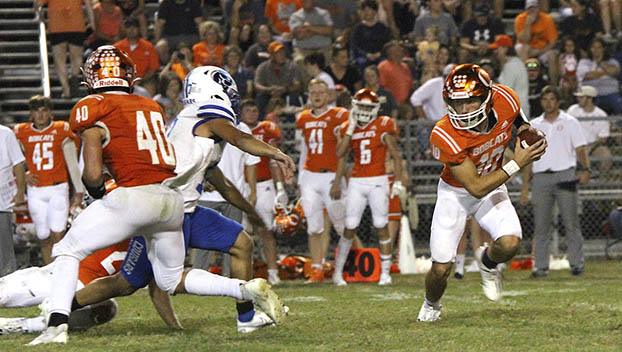 That’s certainly the game plan for the Orangefield Bobcats as they continue their march through District 10-3A Division I.

Orangefield (5-2, 3-0) is sitting pretty at the top of the standings after motoring through their first three district games unscathed, including a 46-0 rout of Tarkington for Homecoming last week.

Now, the Bobcats are focused on tackling the Hardin Hornets (3-3, 0-2) on the road this week.

“I know it may seem cliché, but I tell the kids it’s one week at a time and one game at a time,” said Bobcats coach Josh Smalley. “There’s no need to look back right now and brag about your previous accomplishments or look two or three weeks ahead. I think the kids understand that. They know what is in front of them and they have goals they want to reach.”

The Bobcats are on a quest to win their first outright district title since 1988.

Hardin went 3-1 in non-district play, but the Hornets have hit a rough patch in district, dropping games to Anahuac (65-12) and Tarkington (14-6) before entering their bye week last week.

“Hardin has some talent and we better be ready to play. We went to their place back in 2019 and we barely got by,” said Smalley.

The Bobcats will certainly see a different offensive attack this week. After Tarkington’s game was based on the run, Hardin likes to open it up with an air arsenal.

“They like to throw it more than 60 percent of the time, so we are focusing in on a whole different scheme this week,” said Smalley. “They have two quarterbacks that they change in and out. They have a couple go-to receivers and a good running back. Our secondary, which didn’t get much work in last Friday, will be busy this week.”

Jordan Hendricks has completed 38-of-76 passes for 474 yards and four touchdowns while fellow quarterback Rylee Kobezcka completed 26-of-61 for 407 yards and five scores.

Smalley also wants the Bobcats to be aware of other things the Hornets love to do.

“We have to be on our toes on special teams and on defense,” said Smalley. “They like to do onside kicks and squib kicks. We have to watch for fake punts and halfback-type passes. They like to open up the playbook.”

The Bobcats will look for another big win before entering their bye week next week before hosting Kirbyville Oct. 28.