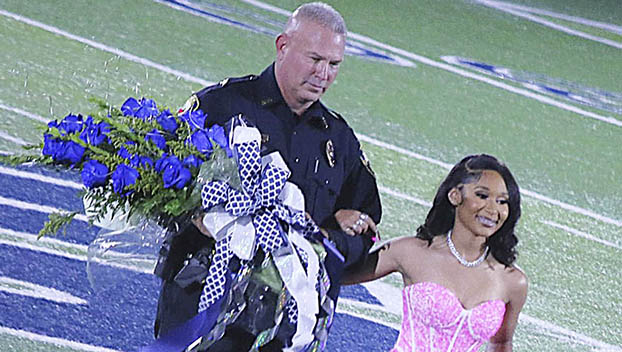 Laughlin held Gradnigo’s large bouquet of blue roses, which were probably too heavy for the high school student to hold while keeping her evening gown from dragging the field.

Gradnigo chose the Orange Police Department officer as her escort because of all he has done for her family and to show her appreciation, she said.

Laughlin was the lead investigator in the homicide of Gradnigo’s sister, Aaliyah, last January.

The two have become friends through the investigation, and now Gradnigo has changed her career path from nursing to criminal justice. 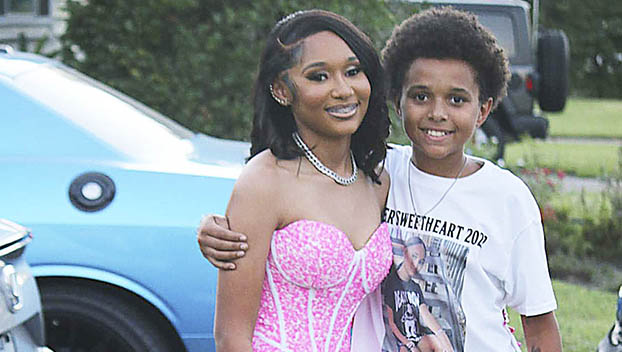 Aamiyah Gradnigo and her sibling pose for a photo. (Courtesy photo)

“She asked me if I could escort her in memory of her sister,” Laughlin said. “Of course I said yes. It meant a lot to me that they asked me to do that. I was completely surprised, floored by the fact I get to do this.”

Laughlin got the approval of the police department who, he said, was very excited about the honor. The blue roses were courtesy of the entire Orange Municipal Police Association, who told Laughlin to get the best bouquet. She ended up with 24 blue roses.

The Laughlins and Gradnigos are now permanent friends.

Gradnigo is a busy student. She’s a cheerleader at the high school, is part of the Early College High School Program earning credits toward an associate’s degree and is on student council.

She described the night of the ceremony as magical.

The man who killed Aaliyah and her boyfriend last year will be in prison for the rest of his life without the possibility of parole, the officer said.

“I never knew the victim, her sister, but through knowing her family, you know what kind of character she had,” Laughlin said.

Amanda Gradnigo, Aamiyah’s mom, said it was very emotional and a great honor for Aaliyah.

While the tragedy is fresh and painful, something good came from it: friendship, love and the support of the community, the mother said. 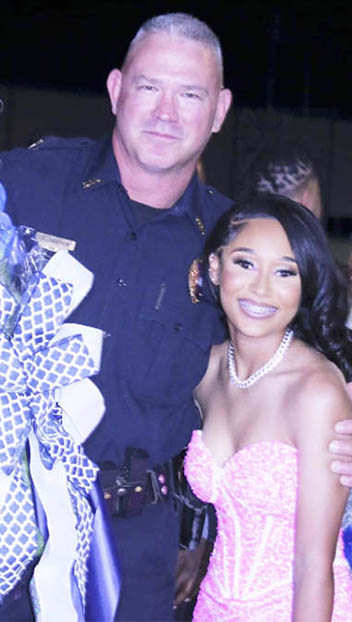 Since her sister’s death and the work to solve the case and prosecute the man responsible for the deaths, Gradnigo decided to change career paths.

“I was going into nursing, but after everything and because of Krispin Walker, assistant district attorney (in Orange) and Laughlin I’m changing to criminal justice so I can help get justice like they did for my family,” Gradnigo said.

Right now she’s thinking of becoming a homicide detective or a district attorney.

Laughlin didn’t intend to become friends with the family.

“We work the case. It took a long time to get evidence, cell phone discoveries. I was in constant communication with the family,” he said. “I didn’t mean to get close to them. I hadn’t gotten close (to others) in 23 years of working cases.”

But this was different.

Now he plans to be at Gradnigo’s graduation, one day her wedding and other important events in her life, they both said.

Laughlin said he is super proud of Gradnigo and wants to stand by her.

The two families have also grown close. Amanda Gradnigo said she met Laughlin’s wife the night of the homecoming celebration and the two talked so much they felt an instant connection.