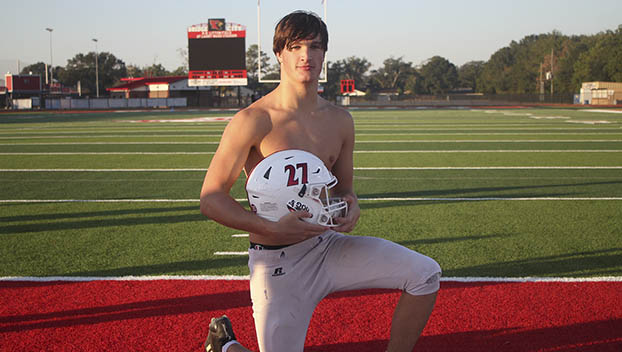 Bridge City sophomore defensive end Bryce Linder has adjusted well playing on the varsity level and has had some huge outings for the Cardinals. (Van Wade/Orange Leader)

BRIDGE CITY – In getting a taste of Friday Night Football for the first time this year, let’s just say Bridge City defensive end Bryce Linder is passing the test and then some.

Linder is part of a young Cardinals team looking to make strides each and every week toward a promising future.

“It’s been crazy, but it’s been a blast, too,” said Linder. “I’ve prepared for this all of my life and I couldn’t wait for the challenge.

“It’s a completely different atmosphere for sure, with the big crowds, but that is what Friday nights are all about. The biggest difference for me is the guys you’re lining up across from now are just so much bigger and more athletic than what I was used to.”

Linder pushed himself hard to step his game up for the varsity level for second-year head coach Cody McGuire.

“Coach McGuire has been so great to me and really has shown a lot of confidence in me and what I can do,” said Linder. “It feels great that he believed I could get the job done, just being a sophomore. Coach (Paul) Landry has really coached me up well on the defensive line. I really thought I had a shot at varsity during the offseason and pushed myself hard all summer long and it paid off for me.”

McGuire is glad to have Linder in his defensive trenches, noting the player’s athleticism and work ethic.

“He really has picked up the schemes well and knows where to go to make the plays,” said McGuire. “He really makes good decisions. He’s not playing like a sophomore. It feels like he’s playing for awhile now, instead of just a little more than half a season.”

Linder had a big outing against Jasper last week, notching 12 tackles, earning him the Cardinals Defensive Player of the Week.

“Bryce played huge for us against Jasper and you could tell how fired up he was,” said McGuire. “He really gives us some energy. He’s one of those kids that just loves the game.”

Linder was able to get off his block and get after the running backs. The more experience he gets, the more confident he becomes, because it’s all about getting those reps.

Linder said the second game of the season against Buna he realized he could play on the varsity level.

At defensive end, he has opportunities to come off the edge to get after the opposing quarterback.

“Don’t get me wrong, I love to rush the passer,” said Linder. “There’s just something more fun about getting after the guys running the ball, it gets real physical in there and I like that.”

Football is not the first time Linder has competed at the varsity level.

He played on the varsity basketball team as a freshman, earning Second Team All-District honors.

“Football is definitely my favorite sport, but I really enjoy playing basketball, too,” said Linder. “I think being on varsity last basketball season really helped me as far as football goes this year. I knew what it was like playing against players much older than me, and it really helped my confidence, knowing I could play against those guys and stay with them.”

Now, Linder and the Cardinals want to finish the campaign strong and grow.

“We’re still a young team and we’ve had a lot of our experienced upperclassmen go down with a lot of injuries, so it has been tough,” said Linder. “But the experience we are getting, you can’t beat that. We’re looking to go out and play hard every game. We’re always building to get better and looking forward to the future too.”