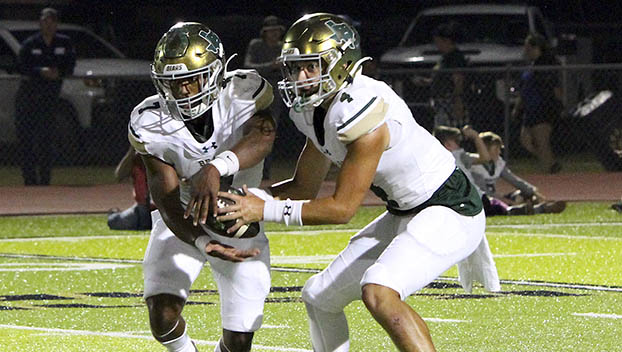 LITTLE CYPRESS – There is no rest for the weary.

The Little Cypress-Mauriceville Battlin’ Bears are hitting the road for the eighth time in nine weeks when they venture to Livingston to take on the Lions in District 10-4A Division I play Friday night.

The Bears (3-3, 0-1) are looking to shake off a hard and physical 36-29 loss at Vidor last week in their district opener. Meanwhile, the Lions (3-3, 1-0) picked up momentum of late, winning three straight, including a 69-34 thrashing of Huffman in the district opener.

“We’re still the road warriors and we have to stay in that right frame of mind after such a tough, physical battle with Vidor last week,” said LC-M coach Eric Peevey. “There are still four big games ahead of us. We’re looking to iron a few things out this week and correct some mistakes that we made last week. It’s going to be another physical battle with Livingston. We can count on it.”

The Lions are led by versatile quarterback Jentavian McNeal, who is fully back after battling an injury earlier in the season. McNeal has rushed for 406 yards and seven touchdowns on 72 carries and has completed 22-of-46 passes for 309 yards and four scores.

The Lions run a power attack with McNeal leading the charge.

You have to be careful with him, said Peevey, because the Lions will line up in power and also the shotgun.

“You have to be careful with him, even when they are in power, because he’ll take off with it and you don’t want him to get the edge or he can take it the distance,” said Peevey, who is also impressed with fullback Connor Starr.

“Starr is a big old kid that’s hard to bring down. He runs full steam ahead, and you have to wrap him up early. He’s like a bowling ball.”

The Lions have another weapon in Jakob St. Martin.

“He’s explosive too,” said Peevey. “He played quarterback when McNeal was out and now they line him up everywhere and like to get the ball in his hands.”

Starr has 324 yards and five TDs on the ground. St. Martin has rushed for 200 yards and four scores and has passed for 217 yards.

Trenden Williams (33-281-2) and Jerron James (40-192) are also involved in the Livingston run game, and Chevy Peters has been explosive at receiver with eight catches for 191 yards and four TDs.

The Bears will look to be more consistent on offense this week against an adequate Livingston defense.

“Livingston has improved a bunch on defense, especially the last couple weeks,” said Peevey. “They like to be aggressive and we have to find our spots to try and take advantage of that. We’ve got to get our passing game in better sync this week.”

At this time of year, it’s all about execution.

“We need to shake off the Vidor game, we did a good job with that last year,” said Peevey. “The kids just have to maintain that drive and stay focused, there is still a lot of football ahead.”