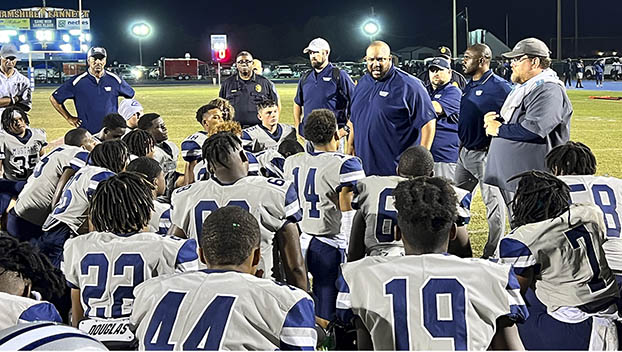 The Mustangs (3-4, 1-2) entered the contest with an undefeated record all-time against the Longhorns (5-2, 2-1) — the loss marks the first time they’ve been beaten by Hamshire-Fannett in school history.

“We just didn’t capitalize when we had the opportunity to do so,” Mustangs head coach Hiawatha Hickman said following the loss.

The Mustangs needed just two minutes to score, as Tahj Amerson rushed for a 15-yard touchdown. The PAT was booted through the uprights, giving the Mustangs a 7-0 edge.

The Mustangs held their opposition to a three-and-out on the Longhorns’ first drive. However, Hamshire-Fannett began a long drive at the six-minute mark that would end in an 11-yard touchdown pass from D’onte Zeno to Tyler Spencer. The Longhorns tied the game, 7-7, at the end of the first quarter.

West Orange-Stark’s next drive brought them inside the Longhorns’ 25. However, the Mustangs were stopped short on fourth-and-inches, turning the ball over on downs.

While Dakarion Judge recovered a fumble for the Mustangs at their own 35, quarterback Marcus Turner Jr. was hunted down by an impressive Longhorn pass-rush. Three straight plays resulted in negative yardage, and they were forced to punt it away.

Hamshire-Fannett took over from their side of the field, rattling off a 12-play, 65-yard drive that ended in a two-yard rushing score by Spencer. The PAT was no good, but the Longhorns entered the half with a 13-7 lead.

The Mustangs defense held strong to begin the second half, and the offense opened the third quarter with a nine-play scoring drive. Turner Jr. completed an 18-yard pass over the middle to Andrew Cooper, converting a crucial fourth-and-14 in Longhorn territory. With the ball on the 3, Jalen Gilmore punched it in for a three-yard touchdown. The PAT was blocked, leaving the game tied, 13-13.

Hamshire-Fannett fired back on their next opportunity. Facing third-and-12, Zeno scrambled away from the pass rush and found a wide-open DJ Brown for a 44-yard touchdown reception. The Longhorns quickly retook the advantage, 19-13, with four minutes to go in the third.

The Mustangs offense took the field again, but a series of penalties led to a punt on fourth-and-40 at their own 10. The Longhorns started a series from their opponent’s 48, driving to the 10. Two plays later, Zeno connected with Pierce Pirtle for an eight-yard touchdown. After the PAT, HF held a 26-13 lead.

The Mustangs weren’t yet finished, though — they scored on a 54-yard pass from Turner Jr. to Nicholas Crosson. Turner Jr. ran in the two-point conversion attempt, bringing West Orange-Stark within five, 26-21, with just over six minutes on the clock.

The WOS defense kept the Mustangs in the game, forcing a three-and-out to regain possession. The Mustangs began their final drive with four and a half minutes remaining. They would convert twice on fourth down, the second of which resulted in a 35-yard gain by Judge out of the backfield. With a minute left and the ball at the Longhorns’ 25, the Mustangs took a shot into the end zone which floated just over the receiver’s shoulder. On third-and-seven, Turner rolled towards the left sideline but turned the ball over, ending the game.