Vidor, LC-M open up 10-4A D1 play in style in hotly-contested matchup 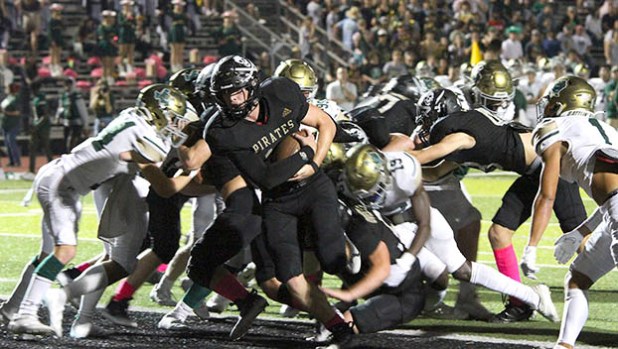 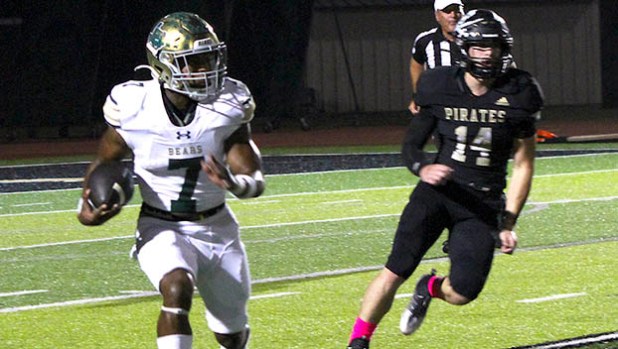 VIDOR – When the season started, the Vidor Pirates were on a quest to defend their No. 1 playoff seed from the 2021 season.

Well, after getting off to an 0-3 start, the Pirates proved that they could right the ship.

They came away with a huge statement Friday night, winning their third straight game by defeating the Little Cypress-Mauriceville Battlin’ Bears 36-29 in the District 10-4A Division I district opener in front of a huge crowd at Pirate Stadium.

The Pirate defense stood strong, shutting down the passing game in the second half of the game.

“What a night, hats off to our kids, they came out and played a great game against a really good football team,” said Vidor coach Jeff Mathews. “The kids really were focused in on this one the last two weeks and they went out and executed. We had a couple of really long scoring drives, which is what we like to do in our offense, but LC-M kept battling back. We gained some early momentum and they took it back right before the half. That long drive in the second half that put us up by two was really huge.”

The Bear’s offense would struggle but they did have one outstanding player, Da’marion Morris. He led the team in rushing yards with 200 yards and in receiving yards with 82 yards on the night. Morris’ biggest play came from a 67-yard rushing touchdown.

Morris was electric when he had the ball, and made plays everywhere he could.

“We new coming in that Morris was a beast and he proved it again tonight,” said Mathews. “Defensively, we made some plays in the secondary that were really big. We were able to spread the ball around with our backs and Jason Watson had a big game at fullback, we needed a game like that from one of our seniors.”

Watson led the rushing game for the Pirates, putting up 133 yards on 19 rushes, including two touchdowns on the night. Watson’s biggest rush was a 41-yard scamper around the outside, that would later convert into a touchdown.

The Pirates made a big stop to start the game, and took advantage of good field position to take an early lead.

A couple of short runs got the drive started after starting at the Bears’ 34.

Quarterback Jarrett Odom found Daigan Venable for a big 16-yard pass to put the Pirates in the red zone. Dane Villadsen punched it in from 14 yards out for the score. After the PAT the Pirates took a 7-0 lead with just under eight minutes left in the first quarter.

The Pirates threw an interception in the red zone, but the defense fixed their mistake quickly with a stuff on the Bears’ offense. Kyler Garlaska got the pick for the Bears, but a run from Morris was stuffed on the next play and he went down in the end zone. Pirates get the safety and stretched their lead to 9-0 with 2:19 left in the first quarter.

Vidor put together another great drive, marching it down the Bears side of the field. Venable broke the drive open with a big 18-yard run to put the Pirates in the red zone. Watson powered in the final two yards for the touchdown. The Pirates did not make the two-point conversion,making the score 15-0 Pirates, with 4:02 left in the first half.

The Bears struck back just before the half with a big play from Morris to start the comeback journey. After stopping the Pirates, the Bears started on their own 33, but didn’t have plans of staying there long. Morris would got the carry, broke a few tackles up the middle and took off, kicking on the afterburners to break away. Morris ran it in from 67 yards for the touchdown. The PAT went through making the score 15-7 Pirates with 3:30 left in the first half.

The Bears kept battling, thanks to the arm of Reynolds, who finished 13-of-30 for 158 yards. Reynolds had five pass completions to get it done the field, finding Kyler Garlaska for two 12-yard passes to get the drive going. Reynolds would then find Morris, with just 11 seconds left in the half. Morris shook one defender and powered through two more to score from 23 yards out as time expired. Reynolds spotted Garlaska again for the two-point conversion, tying the game at 15-15 heading into halftime.

The Pirates got the ball back to start the second half, and wasted no time retaking the lead from the Bears. Watson started the drive with a couple solid runs and a quick first down.

Venable got a carry from the 11, bounced it around the outside and shed a tackler for the touchdown. After the PAT went through the Pirates led 22-15 with 8:40 left in the third quarter.

Vidor extend its lead after stuffing the Bears again on defense. The Pirates marched on a 15-play drive down the field and ate six minutes off the clock. The whole backfield got involved, the big run coming from Watson for 41 yards around the outside. Watson then tallied the touchdown from two yards out. After the PAT, the Pirates led 29-15 as the fourth quarter started.

LC-M kept their hopes alive with another Morris touchdown, this time it came through the air.

Morris zipped to a couple 10-yard runs to get them in Pirate territory and set up a touchdown chance. Reynolds faked a handoff to Morris, Morris swung out towards the sideline and found himself wide-open for a 49-yard touchdown catch. After the PAT the Pirates’ lead shrunk to 29-22 with10:41 left to play.

The Pirates figured out the Bears’ defense and marched it right back down the field for another touchdown. Villadsen had a 16-yard rush, the longest of the drive, after getting the ball in great position. After a Bears’ penalty, Ricky Gall was able to punch it in from six yards out. The PAT went through, making the score 36-22 with 8:26 left in the game.

LC-M put more points up late with a last ditch effort drive late into the fourth quarter. Reynolds would sling it eight times, but would only complete two of those, including the four- yard touchdown pass to Elijah Allison. After the PAT the Pirates led 36-29 with 35 seconds left to play.