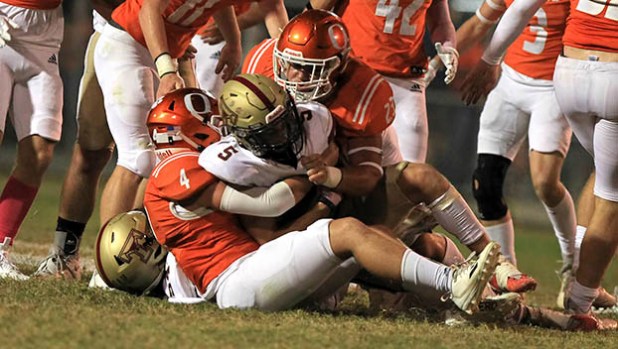 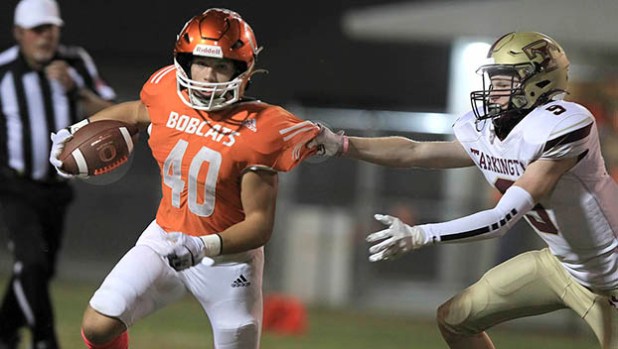 ORANGEFIELD – There was plenty of ground chuck for sale at Orangefield’s F.L. McLain Stadium Friday night when the Orangefield Bobcats welcomed in the Tarkington Longhorns for Homecoming in District 10-3A Division I play.

The Bobcats and their Slot-T Offense was working with precision throughout the night as they blistered the Longhorns 46-0 to remain undefeated in district play.

Orangefield piled up 381 yards on 21 carries alone in the first half. The Bobcat backfield had a field day in the first 24 minutes as the offensive line manhandled the Tarkington defensive front.

Cameron Dischler rushed for 220 yards and two touchdowns on 11 carries in the first half. Gavin Perry-Koci collected 100 yards and two TDs on five carries and Case Singleton strolled for 53 yards and a pair of scores on just four totes.

The Bobcats finished the night with 471 yards, all on the ground, on 33 carries. Dischler finished with 254 yards on 13 carries. Perry-Koci contributed 111 yards on just seven carries and added his third TD in the second half while Singleton wound up with 57 yards on five carries.

“The kids came out here and got off to a great start and we really kept it rolling,” said Orangefield coach Josh Smalley. “Offensively, our line was tremendous and those kids just keep on getting better. They completely controlled things up front. Our backs found the holes and broke away for some big ones. Dischler had another huge night. Perry-Koci, what a fast kid, he showed his breakaway skills. He was just a super overall team effort, especially with it being Homecoming. The kids were not distracted at all.”

The Bobcat defense, meanwhile, stuffed the Longhorns on several big fourth down stops and limited Tarkington to just 80 yards in the half and just 142 for the game.

Karson Jones, who had over 800 yards rushing coming in, led the Longhorns with 45 yards on 19 carries. Michael Galvan finished with 34 yards on 10 carries and fullback Gunner Moore had 28 yards on 12 carries.

“Defensively, we made a bunch of key stops,” said Smalley. “Once they got behind, we knew they would be going for it on fourth down quite a bit and the defensive rose up. We got some guys back from injury tonight. Rusten Traxler, I thought, had a great game. It ws his first action since he got hurt in one of our scrimmages and he was flying around pretty good.”

The Bobcats responded well after an emotional 25-15 road win at Anahuac last week.

“We told the kids we can’t overlook anybody and they didn’t tonight and we have to keep playing with that mindset,” said Smalley. “I thought the Tarkington kids played hard. They are going to be okay, they had 13 sophomores out there tonight, so they will grow and get better.”

The Bobcats wasted little time the first time they had the leather when Perry-Koci went just off left tackle and then found the middle and sprinted 52 yards for a touchdown. Ty Butler booted the extra-point to give the Bobcats a 7-0 edge with 10:31 in the first quarter.

After stuffing Tarkington fullbackGunner Moore on fourth-and-1 at the Orangefield 36, the Bobcats, marched 63 yards in four quick plays, utilizing Dischler’s legs. The back carried three times for 62 yards, with gains of 11, 28 and 23, with the last run being a touchdown right up the gut of the Longhorn defense, pushing the lead to 13-0 with 6:21 in the first quarter.

The Longhorns simply couldn’t stop the bleeding when the Bobcats navigated 94 yards on just three plays to hit paydirt against. After Perry-Koci ripped off a 20-yard run, Dischler broke loose on a swift 65-yard touchdown gallop right up the middle, making it 20-0 with 2:58 in the first quarter.

After holding the Longhorns on downs on the following series at the Tarkington 39, the Bobcats scored again before the first quarter ended when Singleton bolted off left tackle and went 14 yards for a touchdown, pushing it to 27-0 with 0:08 in the first quarter.

The Bobcats put together another quick drive early in the second quarter, going 72 yards in just four plays. Dischler erupted for a 35-yard run on the series and Singleton capped it with a 29-yard touchdown straight up the middle, upping it to 33-0 with 6:43 in the half.

After halting the Longhorns again on fourth down at their own 40, the Bobcats zipped 60 more yards in just six plays to find the end zone yet again.

Dischler carried three times for 46 yards and Perry-Koci got into the right corner of the end zone on a 14-yard scamper to score again with just 0:02 in the half.

The Bobcats went 53 yards in six plays to score with 5:14 left in the third quarter. Dischler carried twice for 34 yards and Perry-Koci found the end zone again for the third time when he scored on a three-yard toss around the left side to make it 46-0.

The Bobcats hit the road next week when they visit the Hardin Hornets while the Longhorns return home to welcome in the Kirbyville Wildcats.