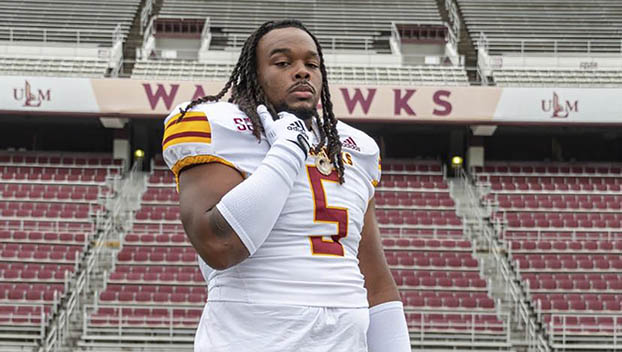 Former West Orange-Stark standout Quincy Ledet, Jr. has made a strong impact in the defensive trenches at Louisiana Monroe as the Warhawks power ahead in Sun Belt play. (Photo courtesy Maquettia Ledet)

It’s rarified air for a freshman to start in his first full season at the NCAA FBS football level.

Ledet started every game but one for the Warhawks as a freshman last season, just missing the last game due to an injury. As a sophomore, he has started the first five games this year as well.

“I always felt like I could excel at this level, because I knew I had the work ethic,” said Ledet. “Us guys from Orange, especially those from West Orange-Stark, we know what it takes to go through that grind as far as working out goes and pushing each other to get bigger, stronger and faster. I was already prepared for the pace of college practices.”

Last year Ledet notched 28 tackles for the Warhawks and became a big hit for his teammates.

“The guys, they kind of look towards me as a leader on the defense, which makes me feel really good. I love accepting that role,” said Ledet. “I love that they respect me like that, especially the big guys up front with me. I tried to get everyone lined up right and get everyone’s juices flowing.”

Ledet felt the transition from high school to college was mind-boggling at times.

“You see it on television and highlights, but you just don’t know until you get out there and play some of those guys out there for real,” said Ledet. “There are some big old dudes you have to go up against every day, whether it is in practice or games. Just the rise in strength and speed is incredible, and it took time to adjust and realize that so many of the guys I go against are bigger than me. In high school, most of the time, I was one of the biggest and strongest players out there.”

Ledet and the Warhawks currently stand at 2-3 overall and 1-1 in Sun Belt Conference play.

However, in two of those losses, the Warhawks took on tradition-rich Power 5 programs in the University of Texas and University of Alabama on the road in front of near capacity crowds.

In the game at Austin, Ledet corralled a superb sack against Texas quarterback Quinn Ewers.

“Those were two hostile environments, but I wouldn’t trade the experience for the whole world,” said Ledet. “It was great to play a game in Austin and a lot of my family was there. I got to catch up with some friends, like Texas’ Roschon Johnson. It was just crazy, going to play in Tuscaloosa. I grew up an Alabama fan, so that whole atmosphere was definitely surreal.”

Ledet and the Warhawks are in the heart of Sun Belt play now and already have a nice 21-17 victory over their in-state rival in the Louisiana Ragin’ Cajuns and will welcome in Coastal Carolina this Saturday.

“We really have a tough conference and the conference has gained a lot more respect the last couple years with some big wins over Power 5 schools,” said Ledet. “Every game is a battle. We just want to continue to push forward, battle for the conference title and try to get to a nice bowl game.”

Ledet, a communications major, has enjoyed the campus life in Monroe.

“The campus is awesome and so are the people, from my teammates, to the coaches, to the students and the teachers, everyone makes you feel welcome here and I love it,” said Ledet. “We’re also right on the bayous here, so it makes for beautiful sunrises and sunsets, it really gives you peace and helps you unwind.”

Ledet had a great run in his days with the Mustangs as a three-year starter.

In his senior year he made First Team All-District as a defensive and offensive lineman. As a senior, he collected 72 tackles, 22 of them for losses, including six sacks.

He was also a multi-sport athlete, competing in the shot put and discus in track, along with being on the powerlifting team and the basketball team.

As a big man on the basketball team, he was known for his silky, smooth, three-point shot.

“I can still shoot that three-point shot well, I still have a little hoop game left in me,” laughed Ledet. “I will always cherish those days at WO-S. It was so much fun to compete in all of those sports. A lot of people there helped shape me into where I am today. I’ll always be grateful.”