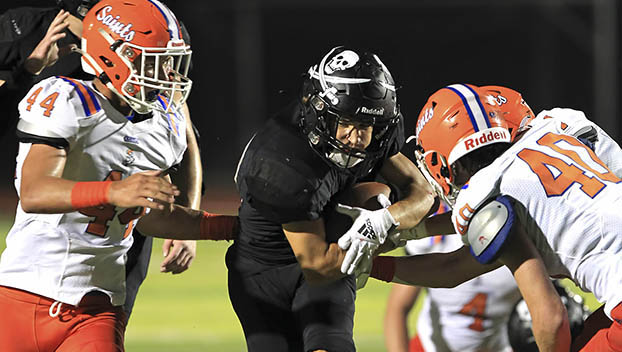 VIDOR – After a solid week of practices during their bye week and some strong workouts this week, the Vidor Pirates are ready to welcome in the Little Cypress-Mauriceville Bears on Friday.

It’s Vidor’s District 10-4A Division I opener at Pirate Stadium.

The Pirates (2-3) enter the game with momentum, winning their last two games.

“We’ve really had a tremendous week and a half of practices and the kids have their juices flowing and can’t wait to get back out there for real again Friday night,” said Pirates coach Jeff Mathews. “The most positive thing is that we are finally back at 100 percent health-wise, which is where you want to be with district starting.”

The Pirates, who shared last season’s district crown with LC-M but earned the district’s No. 1 playoff seed due to a 29-12 win over the Bears, have two huge games in a row to start district play against the Bears at home and then going to Lumberton the following week.

Mathews got a first-hand look at the Bears (3-2) in their game with Spring Legacy last week and came away very impressed.

“LC-M is loaded with so much talent,” said Mathews. “Coach (Eric) Peevey and their staff do a tremendous job. Their offense, you just hope you can do your best to contain it some. They are so wide-open in what they do and love to keep your defense off-balance.”

Running back Da’Marion Morris is one of the best Mathews has seen in the area, saying he moves and cuts like Barry Sanders.

“Dean Reynolds at quarterback, he is rolling with a lot of confidences and distributes the ball to so many different receivers,” said Mathews. “The (Kyler) Garlaska kid is making huge plays at receiver and runs great routes and has speed. The (Jacob) Pollock kid and (Elijah) Allison kid can flat-out catch the ball and break away from you. It’s a task for any defense to keep those guys in front of you.”

Mathews feels the Pirates must wear away at the Bears with their grinding Slot-T offense that has been so successful over the years, including last year’s battle.

“We want to go out there and steadily move the chains. That’s what makes this offense successful,” said Mathews. “That means not getting any costly penalties that put you behind the chains and no turnovers. That’s always been our style. We really like the way our offensive line has stepped up the last couple of games and we’ve got some young backs that have really stepped in and played well. We feel comfortable running five backs in and out of there to stay fresh.”

Mathews feels like it will be a great battle in the trenches.

LC-M, he said, has the best defensive line he has seen in the last six years. Amier Washington is the headline guy because he causes problems in a hurry.

“The rest of those guys up there with him, they are playing super football right now,” said Mathews. “It’s going to be a real challenge for us, and we’re going to have to stay patient and do what we like to do.”

With district starting, it’s a new whole season for everyone in 10-4A Division I play.

“This is the time of the year you want to be playing at your best,” said Mathews. “It’s what you have worked for during all of those tough offseason workouts, summer workouts and non-district. Both teams are hungry for a strong district start, and it should be a really good district opening test for both us in front of a big crowd. I know LC-M fans will bring it. Hopefully we’ll have a full house on our side, too. It should be a great football atmosphere.”