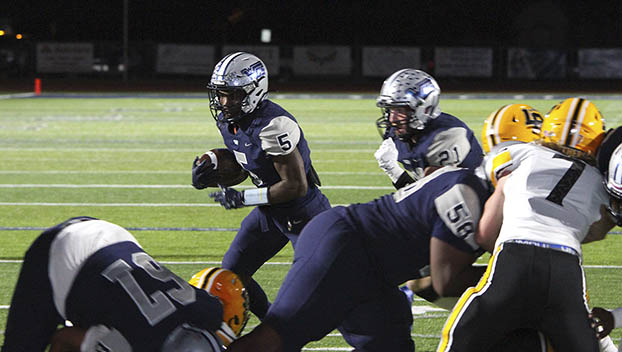 WO-S’ Jailen Brown gets ready to head to the end zone for a touchdown against Liberty last week. (Tommy Mann, Jr./Orange Leader)

WEST ORANGE – After finding the winning formula again, the West Orange-Stark Mustangs venture into Hamshire-Fannett Friday night to take on the Longhorns in a vital District 9-4A Division II affair.

WO-S is feeling better after ending a three-game losing skid by wiping out the Panthers.

“It felt really great to get a win and get back on track,” said Mustangs coach Hiawatha Hickman. “As a staff, we see our guys showing improvement every day in practice, and that’s what you love to see.”

Hickman enjoyed the dominance against Liberty.

“Liberty has some athletes, and our defense really kept them in check,” said Hickman. “We really got our running game churning. Our line controlled things up front. We have what I would like to call a great ‘running back committee’ that really performed well. Marcus Turner Jr. keeps growing at quarterback. It was good to have Raymond Mallett Jr. back last week. Jailen Brown continues to run hard. Tahj Anderson has been a big plus since we moved him up. Dustin Helm has always been steady, and to see him break away for that 99-yard touchdown run was classic. Then we had Dakarion Judge make big plays in the return game. It was a great overall effort.”

Hickman and the Mustangs are gearing up for a talented Hamshire-Fannett squad, sparked by quarterback Darius Zeno, who has completed 44-of-82 passes for 895 yards and six touchdowns.

“We’ve been seeing this kid on the varsity level ever since he was a freshman and he’s the real deal,” said Hickman. “You don’t want to give him much space, that’s for sure. He has tremendous wheels. He also makes big plays when something breaks down with his scrambling ability.”

“Those guys can find the open spots, and they really help Zeno out when he is scrambling,” said Hickman. “We’ve got to be on those guys the whole way, stay with them.”

Longhorns running back Seth Ramirez has 276 yards and three TDs on 36 carries. For a twist, the Longhorns bring in Ty Bryson at quarterback at times. Bryson has completed 17-of-23 passes for 303 yards and two scores.

“They have a versatile offense, you have to be ready for anything,” expressed Hickman.

Hickman wants the Mustangs offense to find the open spaces when they have the leather.

“Hamshire is very aggressive on defense. They like to play man-to-man in the secondary and rush their front seven,” said Hickman. “We feel like we can get our athletes into some free space and let them go, but we’ve got to make it happen.”