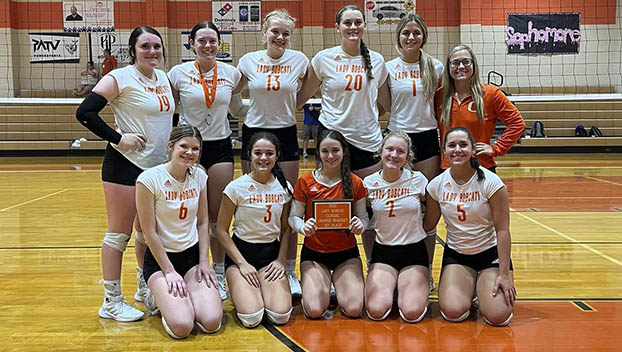 The Orangefield Lady Bobcats took down Kountze to finish the first half of District 22-3A play with a 5-2 district mark. (Photo courtesy Orangefield Volleyball)

Mackenzie Haley had 15 kills for the Lady Bobcats while Harleigh Rawls and Greenlea Oldham had six apiece.

Taryn Doiron had 13 assists, four kills and four aces for the Lady Cardinals.

Rylee Sherman had four kills while Madison Jones had three. Natalie Morrison and Brilie Cornelison had two kills apiece and Madi Powell had one.

LITTLE CYPRESS – The Little Cypress-Mauriceville Lady Bears made quick work of Silsbee in District 22-4A action, improving to 5-1 in district play with a 25-10, 25-13, 25-1 win over the Lady Tigers. Chrissy Joseph had nine kills for the Lady Bears while Lindi Perry had five.