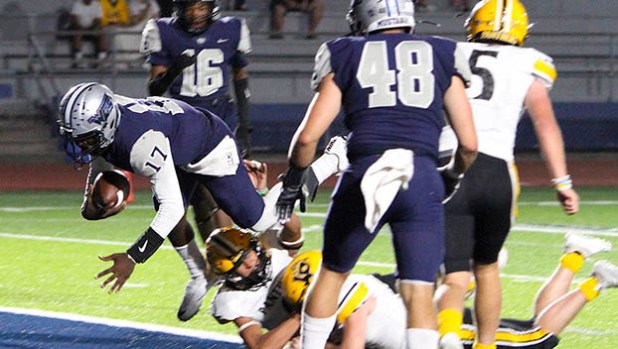 WEST ORANGE –It was a night to celebrate in Mustang Country.

The West Orange-Stark Mustangs trounced the Liberty Panthers, 53-8, in Friday’s District 9-4A Division II battle in front of a nice Homecoming crowd.

After a three-game losing streak, including their first district loss since 2009, the Mustangs (3-3, 1-1) needed to come out of the gate swinging. They did — West Orange-Stark’s blowout win on Homecoming night represented a return to the norm against the Panthers (0-6, 0-2).

“We weren’t a ready-made team in the beginning of the season,” said Hiawatha Hickman, who is in his first season as the Mustangs’ head coach. “This is where you need to start hitting your stride in district play, and we’re getting there. We’re getting to where we need to be, and that was the difference out here tonight.”

After a 15-play, 75-yard drive to begin the game, the ‘Stangs were stopped on fourth-and-goal from the one-yard line. Despite the early sputter, the Mustangs defense forced a safety, with Andrew Wilson making the tackle.

With five minutes left in the first quarter and a 2-0 lead, the Mustangs were set to receive the punt following the safety. The ball fell into the arms of Dakarion Judge, who weaved between defenders and took it 70 yards for a return touchdown. Quarterback Marcus Turner Jr. rushed for a two-point conversion, giving West Orange-Stark a 10-0 lead.

They had retaken the momentum, and they never looked back.

At the start of the second quarter, Jalen Gilmore rushed for a two-yard TD, making it a 17-0 game. After forcing the Panthers offense to punt it away, the Mustangs retook possession and marched downfield yet again. Turner completed a couple of big passes, setting his team up at the Panther 2. Jailen Brown punched it in with a two-yard rushing score. The PAT was blocked, but the Mustangs still led, 23-0.

Liberty fumbled the ball on the ensuing kickoff, and De’marcus Warren Jr. recovered it for West Orange-Stark at the Panthers’ 24. Five plays later, Turner Jr. ran a QB draw in for a two-yard touchdown. Gilmore rushed for the two-point conversion as the Mustangs held a commanding 31-0 lead with 30 seconds left before the half.

The Mustangs’ defense wasn’t really threatened for most of the night. They conceded their only touchdown on a pass that was tipped by a cornerback, but snagged in the end zone by Dawson Victorian for a score. Zach Breaux hauled in the two-point attempt, bringing the score to 31-8.

However, West Orange-Stark continued to dominate on both sides of the ball. The Mustangs scored three more times. Tahj Amerson rushed for a 17-yard score near the end of the third quarter, followed by a six-yard touchdown reception by Judge in the fourth. Dustin Helm found the end zone at the end of the game with an incredible 99-yard rumble down the left sideline. A fake field goal on the PAT resulted in a two-point pass to H. Clayton Whatley III, capping off the 53-8 victory.

The Mustangs will face the state-ranked Hamshire-Fannett Longhorns on the road, next week.

“I know from the past they’re going to bring some heat,” Hickman said. “We’re going to respect everybody, but we’re going to go to Hamshire and try to win another district ballgame — because I think this district is still wide open.”