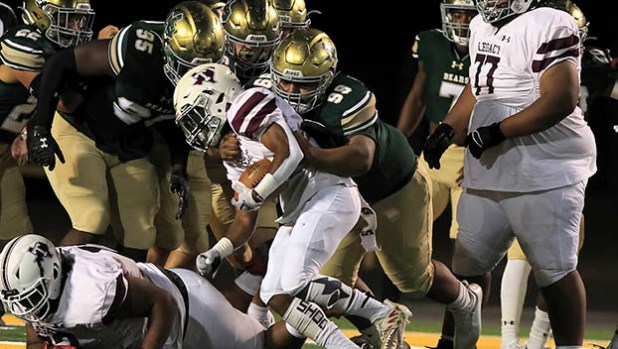 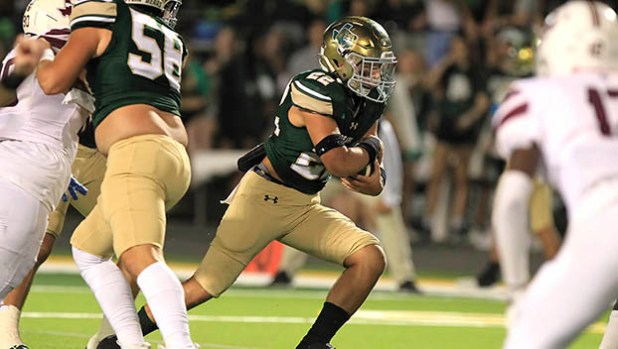 LITTLE CYPRESS – In front of a sold out crowd to celebrate their new turf field and their first home game of the season, the Little Cypress-Mauriceville Battlin’ Bears claimed a 50-34 victory over the explosive Spring Legacy Titans at Battlin’ Bear Stadium Friday night.

The game certainly big offensive plays and the Bears had the most of them.

“This crowd was simply insane tonight,” said Bear coach Eric Peevey. “It was electric and I’ve never seen this many people piled up in here. It was a great moment for the community, getting to see us perform on this field. At times, I thought our kids were a little too jacked up.”

LC-M senior standout running back Da’Marion Morris had 83 yards on 18 carries while Reynolds had 64 yards on 11 totes. Kyler Garlaska had three catches for 80 yards for the Bears while Jacob Pollock snagged four passes for 52 yards.

“Dean really had a great game, getting the ball to a bunch of receivers,” said Peevey. “Garlaska made some huge catches tonight and so did Jacob Pollock. We got our running game going pretty well and that made a difference.”

“The Smith kid at quarterback is an amazing talent and he’s capable of making a big play at any moments, he’s rare, and I’ve seen some good ones,” said Peevey. “That got us on a few big pass plays, but I think a big difference is that we slowed down their running game.”

The Titans had only 95 yards rushing on 35 carries.

The Bears were able to snag a 22-14 halftime edge.

After stopping the Bears on fourth down at the LC-M 45 on the first series of the night, the Titans zipped 45 yards in just four plays to grab the lead.

Smith found a streaking Keisean Henderson down the right sideline and hit him in stride on a 42-yard strike to the Bear 1. Two plays later A.J. Merrida scooted around the right side for a two-yard touchdown. The Titans got a two-point conversion pass from Roric Hawkins to Michael Brown, making it 8-0 with 8:35 in the first quarter.

The Bears responded quickly, going 56 yards on seven plays to hit paydirt the next time they had it.

Reynolds was 3-for-3 on the drive for 20 yards. Morris carried four times for 23 yards and capped it with a 14-yard touchdown dart off right tackle. Lucas Wright booted the extra-point as LC-M cut it to 8-7 with 6:48 in the first quarter.

After holding the Titans on four downs, the Bears took over at the Legacy 42. Reynolds had a nice 24-yard pass to Jacob Pollock that got to the Titan 10. However, the Titans held and Stephan Reynolds blocked a 22-yard field goal attempt by Wright with 2:05 in the first quarter.

The Bear defense rose up and forced a punt by the Titans. Legacy had a bad snap on the punt and the Bears took over at the Titan 13.

On the very next play Reynolds hung one up for receiver Garlaska in the left side of the end zone. Garlaska made a great leaping catch for a 13-yard score. The two were not done when Reynolds connected with Garlaska on a two-point conversion pass, giving the Bears a 15-8 edge with 1:11 in the first quarter.

Morris picked off a Smith pass at the Bear 26 with 11:50 in the half and the Bears took advantage with a long touchdown march. LC-M went 74 yards in 12 plays. Reynolds hit Garlaska with a huge 23-yard gain over the middle. Morris went on a 10-yard jaunt to the Titan 17. Reynolds broke loose on a nine-yard gain and then found Morris with a six-yard touchdown dart along the left front of the end zone for the score. Wright drilled the extra-point, making it 22-8 Bears with seven minutes left in the half.

The Titans bounced back off the deck with a 10-play, 78-yard touchdown drive. Smith completed three passes for 53 yards, 48 of them going to receiver Mcclatchey, who capped the drive by hauling in a 31-yard strike from Smith down the right sideline for the touchdown. The two-point conversion pass failed as the Bears held to a 22-14 lead with 1:02 in the half.

The Bears outgained the Titans 203-135 in the first half.

Reynolds completed 12-of-16 passes for 109 yards with Pollock hauling in three receptions for 34 yards. Morris had 45 yards on eight carries while Reynolds had 28 yards on eight totes.

Smith completed 5-of-12 passes for 98 yards for the Titans. Merrida had 24 yards on six carries as the Bears held the Titans to 37 yards on 18 carries on the ground.

Smith got loose for a 18-yard run and Hawkins ripped off a 19-yard dart. The Titans faced a fourth-and-12 from the Bear 16 and Smith found Reynolds in the back left corner of the end zone for a 16-yard touchdown toss. The Bears maintained the lead though when the Titans’ two-point conversion pass failed.

The Bears retaliated quickly, navigating 54 yards in just four plays. Reynolds picked up nine yards on two runs and then found Garlaska with a sharp pass over the middle. Garlaska then pulled away from the Titan secondary for a 44-yard touchdown completion. Wright booted the extra-point, pushing the Bears back up 29-20 with 5:43 in the third quarter.

After halting the Titans on four downs, the Bears took over at their own 49 and scored four plays later. Reynolds had a huge 42-yard connection down the left sideline to Elijah Allison and Morris finished it off with a nine-yard touchdown scamper up the middle, making it 36-20 with 1:33 in the third.

The Titans responded with a five-play, 44-yard touchdown drive in the middle of the fourth quarter. Smith teamed up with Henderson on a 20-yard pass to the Bear 14 and then he found Cameron Hawkins on a 14-yard touchdown pass. Smith and Hawkins then teamed up for the two-point conversion pass, trimming it to 36-28 with 5:40 left.

The Bears became more comfortable though when they marched 65 yards in six plays to go up by two scores again. Reynolds found Pollock for a nice 18-yard gain on the series and the senior quarterback ended up capping it with a 27-yard quarterback keeper straight up the middle for a 27-yard touchdown, pushing it back to 43-28 with 2:18 left.

Taking over at the Titan 7 late in the game, Morris zipped around the left end for a seven-yard touchdown jaunt, making it 50-28 with 1:48 left.

The Titans made sure the Bears remembered them with a four-play, 59-yard drive with Smith and Mcclatchey completing it with a 37-yard touchdown connection, trimming it to 50-34 with 0:51 left.

The Bears now turn their attention to their district opener against Vidor next week.

‘We’ve got two straight tough road  games in a row,” said Peevey. “We face a always tough and physical Vidor team at their place next week and there will be a huge crowd there. Coach (Jeff) Mathews will have those Pirates fired up and ready to go. Then we go to Livingston, which is always a tough road trip for sure.”