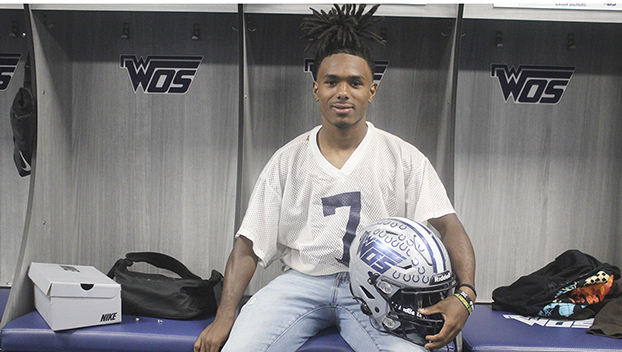 WO-S senior Dakarion Judge has been a force in all three phases of the game for the Mustangs during the last three seasons as he looks to continue his prowess the remainder of the season. (Van Wade/Orange Leader)

WEST ORANGE – It’s hard to believe he is a senior, but West Orange-Stark fans have watched Dakarion Judge be “The Playmaker,” going back to his sophomore season.

Judge has bedazzled Mustangs opponents in all three phases of the game. He’s an excellent receiver and defensive back and has been huge as a return man.

“I do whatever I possibly can to help our team win,” said Judge. “I really love getting my hands on the ball anyway possible because I always feel like I can do something with it.”

That was the case in last week’s game against Silsbee.

Judge had a strip of Silsbee receiver Dre’lon Miller and returned it 48 yards for a touchdown and also hauled in a 47-yard touchdown pass in which he outraced the Tigers secondary.

Head coach Hiawatha Hickman said Judge has been a “playmaker” since he was a sophomore.

“He has so much explosiveness and if he gets ahead of you, you’re not going to catch him,” said Hickman. “Any time he touches it, whether it is on offense, defense or special teams, he’s capable of taking it the distance.” 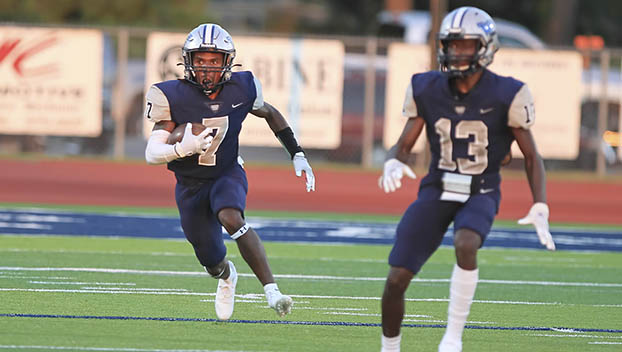 Judge has had some memorable moments, but his favorite was the first game of last season.

“I brought my first kickoff return all the way for a touchdown from about 95 yards out against Nederland, and that was such a great feeling,” said Judge. “There is nothing quite like getting a big return and getting the whole team fired up and jacked up.”

Judge has built up his speed his entire life.

“It may have started when I got off the bus when I was in kindergarten and I used to run all the way to my great grandmother’s house. I did that all the time,” explained Judge. “Then I played in the Lil’ Mustangs growing up from flag all the way up. I think everyone realized how fast I was by my second year of tackle football.”

Judge has a nice Mustangs bloodline. His father, Darrow Judge Jr., was a standout on both sides of the ball way back when he suited up at WO-S.

“My Dad has always been a great influence,” said Judge. “I’ve seen some of his old highlight tapes and I’ve always wanted to make mine better than his. He was really good, but I think I’ve got him, as far as the highlights go. I love picking on him.”

Hickman feels Judge is a player all of the teammates can look up too.

“Dakarion is one of the most quiet and humble kids you’ll find,” said Hickman. “Everything is always ‘yes sir’ and ‘no sir.’ He’s not afraid to get in there and do the dirty work. He leads by his actions on the practice field and in the games and is a pure pleasure to coach.”

Judge is looking to find more ways to get his hands on the ball.

“Everyone seems to be kicking away from me this year, and I have not had many opportunities in the return game because they are scared,” said Judge. “I’m just trying to stay involved in everything else. I still have not got a pick-six yet and I would like to get some rushing touchdowns to go along with receiving ones. Anything that helps us get that ‘W.’”

“Opponents simply don’t want to kick to him anymore,” expressed Hickman. “Usually when they do, it’s time to get that popcorn ready.”

Judge will be busy after football season, as he is a powerhouse on the track team. He runs the 400, 200 and 100 meters and also runs a leg on all three relay teams.

“It keeps me in great shape and I just love to run,” said Judge. “We’ve got a lot of guys back this year and I think we’re going to be really fast.”

Judge and the Mustangs are competing in a rugged District 9-4A Division II football district and he feels the team will meet the challenges ahead.

“We’re going to go for it and go battle every time we step out on the field,” said Judge. “We’re turning over a new leaf and it’s going to be one game at a time.”

Judge may be small in stature to some but he handles it well. His playing style is very similar to former Mustangs standout K.J. Miller, who is wrapping up a great run at Mary-Hardin Baylor this year.

“I have always admired K.J. You have to play bigger than your size,” said Judge. “I’ve heard a lot of talk about my size over the years, and I’ve been picked on at times, but that just adds more motivation. One thing no one can measure is the size of your heart.”

Judge has plans to continue his football prowess at the next level.

“God willing, I hope I can find a college home somewhere and continue to play,” said Judge. “It doesn’t have to be any big NCAA Division I program. I just love the game and I want to continue to grow in the sport and receive a college education, that’s what it is all about for me.”