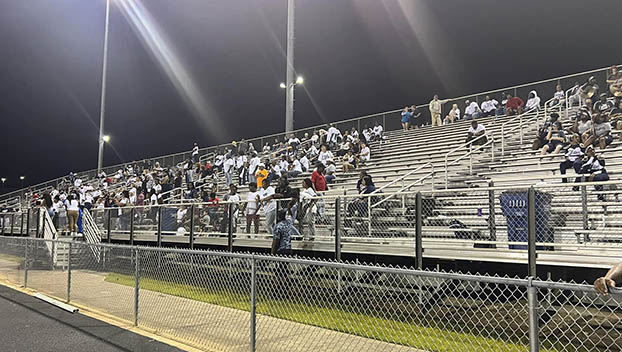 The West Orange-Stark crowd dwindles late in the fourth quarter during the Mustangs’ game on the road against the Silsbee Tigers.

It was a tough couple days of football watching for me, starting Friday night into Saturday.

On Friday, I witnessed the West Orange-Stark Mustangs drop their first district game since 2009, as they fell to Silsbee, ending a 69-game district winning streak.

Then I saw the Texas Longhorns fall into that usual trap on a road trip in Lubbock against the Red Raiders. And it also looks like my Lamar Cardinals are heading to a possible winless season.

However, I’m going to keep my head up and continue rooting for my college teams and all of the squads in Orange County.

My concern is what is taking place among the fan base at West Orange-Stark.

Mustangs fans tend to be “spoiled,” after all. Their proud and rich program is the winningest team by percentage in our state’s history. A 437-106-3 record is nothing to sneeze at, right?

Heck, the Mustangs have “spoiled” me, too. They have played 108 playoff games, and I’ve had the pleasure to cover more than 80 of them and five State Championship games.

The last few weeks have been concerning after the Mustangs have dropped three in a row. Against Port Neches-Groves, we saw a mass exodus near the end of the game, once fans figured out the outcome was not going to be in their favor. In Newton, I saw water bottles being thrown on the field by Mustangs fans. Against Silsbee, the crowd had to be at least a 5-to-1 ratio in favor of Silsbee.

The energy of the crowd, even before they leave, is weak. The Mustang Band has been rocking it, the cheerleaders and Fillies have been trying to lift everyone up and the football student-athletes are playing as hard as possible. That has not changed, but the crowd has.

It didn’t just start this year, it’s been going on for the last several years.

Mustangs fans and community, your kids need support from you.

LC-M, Bridge City, Orangefield and Vidor fans are always loud and proud. It doesn’t matter if their teams finished 2-8, 8-2, 9-1, or 4-6, they are all in. They stay in support of the entire process. The majority stay and wait for their bands to play the school song and give the football players one final roar, whether they won by 40 or lost by 40.

Not the case for a lot of WO-S fans, they are ready to get on social media as soon as possible, blasting coaches and creating their own playbooks. Before you think that is just a problem with this current season, think again. It’s been going on for years.

I see that word “spoiled” creeping back in.

Social media has made things so much worse. There are “Monday morning quarterbacks” everywhere you turn.

The Mustangs have been to eight state championship games and have won four. I was fortunate to work with legendary coaches Dan Hooks and Cornel Thompson year after year and have seen how much hard work and dedication it took to turn the program into what it is.

However, there are Mustangs fans out there who think if they would have done this or that, WO-S should have (laughing) at least nine more state titles. The Mustangs are 79-29 in the playoffs. Just thinking about that seems insane. Thirteen of those losses came against the eventual state champion. I saw a lot of those games.

I don’t want to break some folks’ hearts, but the Mustangs were not the best team in 90 percent of those 13 battles.

I must say Silsbee was the better team on Friday night, as well. That might be the best Tigers team I’ve ever seen, and I have seen some good ones.

WO-S is five games into the transition season with coach Hiawatha Hickman leading the way. I look at the schedule ahead, and if the Mustangs maintain their focus, which I know they can, and avoid all of the “outside” noise, they will be just fine the rest of the way.

I’ve been in this business for 30 years and know how much work the students and coaches put in. The countless hours coaches put in blow my mind, and yet they still have to deal with so much outside pressure. That’s what I admire most about them.

Rise up Mustangs fans. I’m not talking about just the football program.

Other items have been burning in my gut as well and it has to come out.

Where is the turnout for girls basketball, volleyball and softball? Support the entire athletic program.

It’s heartbreaking at times to go to a Lady Mustangs home district basketball game, let’s say against LC-M and Bridge City, and the visiting teams’ crowds out number the home team 10-to-1. If I’m a player, that would really bother me and hit hard.

So I feel for Mustangs athletes.

In boys basketball, the crowd shows up for big rival games against Silsbee or LC-M, but it’s almost “crickets” for all of the other games.

I know people are going to say, “Van didn’t graduate from here, so why is he being so loud. He was raised on the other side of the Interstate.”

I just want what is best for all of our schools. I am and always will be a supporter of all of the kids in Orange County. I remember growing up how loud and proud the entire WO-S fan base was. Sure, I know the enrollment has decreased, but the support, it should always be there from the community. Kids are still kids. They have eyes and hearts.

As for the “Saturday morning football couch coaches” ripping on social media, get ready, loss No. 107 is coming. It may come next week, it may come next month. Heck, hopefully it may not come until next year or the year after that, but it is coming.

For all of those true Mustangs fans, and I know so many of you, keep on keeping on.

I see you. Keep bringing those clappers. For ya’ll, I always know it’s “Blue Line Time.”