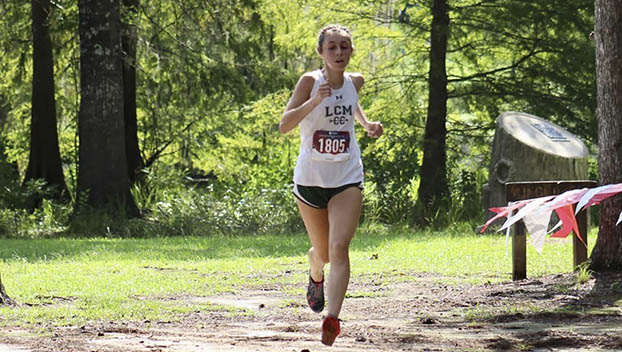 LC-M’s Annabelle Fisher had a nice outing at the Liberty Cross Country Meet, running a 12:30.2 to finish in second-place overall. (Courtesy Photo)

The Bobcat team had strong finishes as well. The Boys would run first, and would see another great outing. First to cross the line was Tanner Sullivan in 13th place with a time of 18:40. The next Bobcats to place would be Timothy Trammell and Carson Worthy in 17th and 19th place running around the 19 and a half minute mark. Ty Butler would just narrowly miss the medal stand finishing in 24th place but ran well. The Boys finished in third place out of 10 teams in the official standings.

The Lady Bobcats saw some new personal record performances, starting with Aubree Beck running a 14:38. Next through the line was Kadee English with a new PR of 14:59. Jocelyn Hernandez and Madison Trammel would continue improving their times with new PR’s of 15:39 and 15:40.