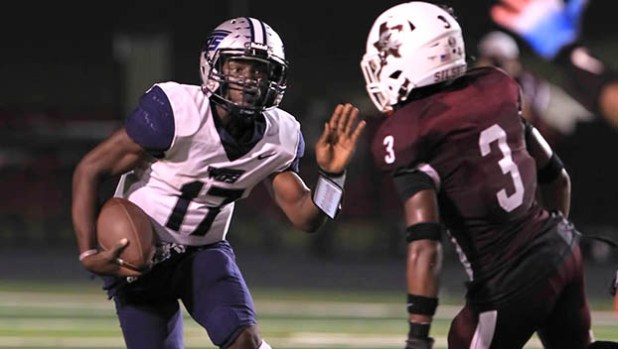 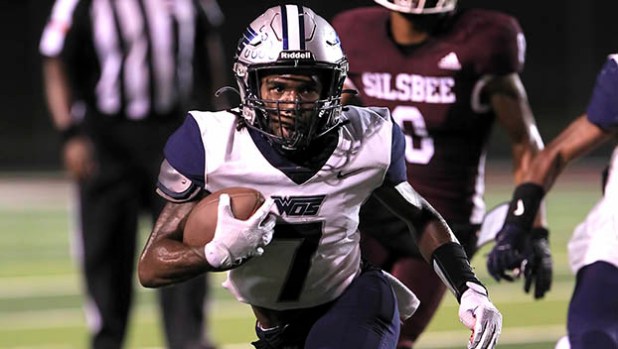 WO-S defensive back Dakarion Judge returns a fumble for a touchdown against Silsbee. (Mark Pachuca/Orange Leader) 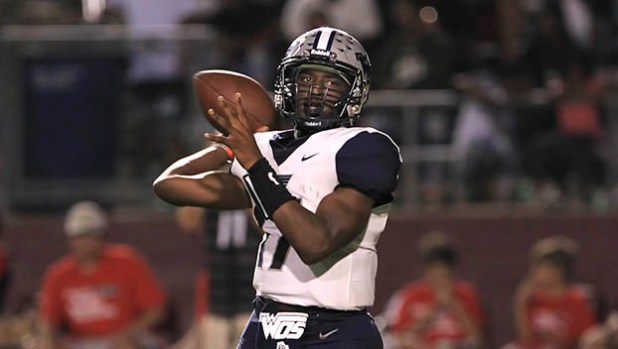 SILSBEE – Simply having no answer for standout Silsbee receiver Dre’lon Miller, the West Orange-Stark Mustangs dropped their first district game since 2009, falling to the Tigers 48-27 at Tiger Stadium Friday night in the district opener for both squads.

The Mustangs entered the game with a 69-game district winning streak.

Miller accounted for five touchdowns and finished with nine receptions for 230 yards and rushed the ball six times for 132 yards as the Tigers improved to 5-0 on the season and 1-0 in district play.

“We had no answer for that Miller kid, he’s a dude that can go,” said Mustang head coach Hiawatha Hickman. “We had two guys on him, sometimes three, and he was still making great plays. We were in it, but we let it get away from us in the second half. We need to go back to work and start putting things together. We’re still a young football team and I believe in these kids.”

The Tigers piled up 564 yards of total offense. Silsbee quarterback Mason Brisbane completed 14-of-23 passes for 357 yards. The Tigers finished with 207 yards on the ground on 31 carries.

“Offensively, we made too many mistakes,” said Hickman. “We had too many penalties and we had several dropped passes that really hurt us. We’re going to work hard to fix this, there is still plenty of season to go.”

Despite three big turnovers, Silsbee still managed a 24-21 lead at half time.

The Mustangs got on the board first thanks to a great defensive play by defensive back Dakarion Judge.  Miller caught a swing pass from Brisbane along the left side and Judge, making a brilliant play, stripped the ball away and zipped 48 yards down the right sideline for a touchdown. Jalen Gilmore booted the extra-point, giving the Mustangs a 7-0 lead with 8:24 left in the first quarter.

The Tigers answered right back on the next series as Miller redeemed himself. Brisbane, who was 6-for-6 on the march, found Miller for a 34-yard pass down the right sideline that got to the Mustang 38. On a fourth-and-4 from the 32, Brisbane spotted receiver Geremiah Jackson with an 11-yard dart to keep the drive alive.

The Tigers capped it when Brisbane found Miller streaking over the middle near the end zone for a 21-yard touchdown strike. Kicker Kolby Arceneaux drilled the extra-point, tying it up at 7-7 with 4:37 in the first quarter.

Silsbee defensive back Kye Elder picked off a Turner, Jr. pass on the ensuing series at the Tiger 40 and returned it to the WO-S 40.

After Miller hauled in another 34-yard reception that got to the WO-S 11, the Mustang defense held firm and the Tigers settled for a 26-yard Arceneaux field goal to go up 10-7 with 2:24 still in the first quarter.

The Mustangs retaliated in fine fashion when they zipped 62 yards in four plays. They got a big first down on a late hit by the Tigers and took full advantage of it. They scored when Turner, Jr. tossed a quick swing pass to Judge along the right side and Judge utilized his speed to cut up the field and he outraced the Tiger defense for a 47-yard touchdown, putting the Mustangs up 14-10 with 0:17 in the first quarter.

The Mustangs cashed in on a Tiger miscue. Silsbee return man Trei Kibbles muffed a punt at the Tiger 39 as Mustang Derrick Williams, Jr. jumped on the loose ball.

Turner had a strong scramble and found Jailen Brown open on the right side and Brown got all the way to the Silsbee 17 for a 22-yard gain.

Four plays later on a crucial fourth-and-4 from the 11, Turner had a superb rollout to the right and found Andrew Cooper along the right side for an 11-yard touchdown strike, giving WO-S a 21-10 edge with 7:31 in the half.

Silsbee got off the mat in a hurry on the next series when Miller outleaped two Mustang defenders along the left sideline to haul in a Brisbane toss and went 58 yards for the score, trimming it to 21-17 with 7:09 in the half.

The Tigers grabbed the lead with a eight-play, 65-yard drive.

The big play of the series was a 29-yard Brisbane to Ashton Cartwight pass along the left side in which Cartwright made a great snag that got to the WO-S 36. Brisbane got loose on a big 11-yard keeper and Kibbles had a 14-yard jaunt to the Mustang 11. Four plays later fullback Jayron Williams scored on a two-yard run up the middle, making it 24-21 Silsbee with 3:20 in the half.

Silsbee outgained the Mustangs 297-158 in the first half.

Brisbane completed 11-of-17 passes for 223 yards with Miller hauling in eight of them for 174 yards.

Turner, Jr. was 6-of-11 for 107 yards for the Mustangs, finding five different receivers. Brown had two catches for 24 yards. Turner Jr. had 24 yards on 10 carries. Kibbles had 29 yards on three carries for the Tigers while Miller had three totes for 22 yards.

The Mustangs grabbed the lead again on their first series of the third quarter, going 71 yards in six plays. Turner, Jr. threw a beautiful deep ball to receiver Nicholas Crosson for a 34-yard gain to the Tiger 25 and a Silsbee facemask on the play moved it to the 12. Three plays later Turner, Jr. scooted off left tackle for a four-yard touchdown jaunt, making it 27-24 with 4:37 in the third quarter.

The Brisbane to Miller connection came up huge on the next Tiger possession when on third-and-13 Brisbane threw it into a crowd over the middle to Miller, who made a great catch on two Mustang defenders and he sprinted the rest of the way for a 56-yard touchdown pass, putting the Tigers up 31-27 with 3:25 in the third.

Silsbee scored again the next time they had it, but settled for three points. Brisbane had a huge 63-yard bomb down the left sideline to receiver Kye Elder, hitting him in stride down to the Mustang 13. The Mustangs held and Arcenaux drilled a 28-yard field goal on the first play of the fourth quarter.

After holding the Mustangs on four downs at the Tiger 41 with 3:54 remaining, the Tigers went 59-yards in three plays to hit paydirt. Miller finished it with a 33-yard run around the right side for the touchdown, making it 41-27 with 2:48 left.

Miller capped his huge night, breaking loose on a 76-yard touchdown dart down the right sideline with 1:18 remaining.

The Mustangs will look to bounce back when they return home next week when they welcome in the Liberty Panthers.