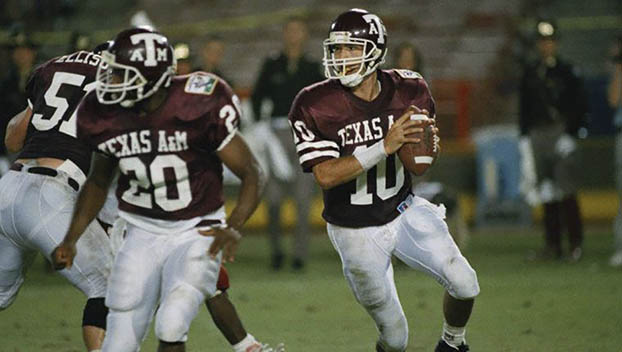 Orangefield legend Jeff Granger, who also starred at Txas A&M in baseball and football and who was drafted by the Kansas City Royals, will be inducted into the Museum of the Gulf Coast Sports Hall of Fame Saturday. (Leader file photo)

PORT ARTHUR — It will be a shining moment for a former Orangefield great as Jeff Granger is inducted into the Museum of the Gulf Coast Saturday.

Granger is one of three inductions that will go into the facility’s Sports Hall of Fame. The other two are Mike Simpson and Jason Tyner.

The induction ceremony begins at 2 p.m.

“This is always such a special event and all of these gentlemen are certainly worthy of receiving such an honor,” said Museum of the Gulf Coast Director Tom Neal. “We’re expecting a really nice crowd. I know a lot of the family members are coming. Each one of them have represented the Golden Triangle and Southeast Texas so well over the years.”

Granger was a star quarterback and pitcher for Orangefield, who later went on to star at Texs A&M University and was drafted by the Kansas City Royals.

“Jeff is so deserving, he was such a multi-sport talent and every one I’ve talked too, from high school teammates to college teammates, always mention how quality of a person he is,” said Neal. “I know one thing, he has a tremendous family that has always backed him. He has really flourished after his playing days, working at J.P. Morgan as an advisor for I believe 15 years.”

In 1990, his senior year, Granger led the Orangefield Bobcats to the state semifinals with a 23-6 record.

In two seasons for Texas A&M, Granger had a record of 16-6 with 251 strikeouts in 220 innings during his first two seasons. In 1993, he broke the Aggies record with 150 strikeouts and broke Roger Clemens’ Southwest Conference career strikeout record. He was the College Station Regional MVP in the College World Series and was all-SWC as well as being named a first team All-American. Granger was a finalist for the Golden Spikes award and pitched for Team USA in international play.

Granger was drafted in the 1st Round (5th overall pick) of the 1993 MLB Draft by the Kansas City Royals. He was only 21 when he broke into the majors with the Royals.

Former MLB Player Tyner attended West Brook in Beaumont, where he was named Beaumont Student Athlete of the Year and was a member of the National Honor Society as a junior and senior.

Following high school, he went to Texas A&M University, graduating in 1998. At A&M, he was named All-Big 12 (along with Jason Jennings) and second team All-American in 1998. He finished his collegiate career first on A&M’s all-time list for hits and stolen bases, was second in batting average and third in at-bats. Making the feat even more remarkable was that he set the records in only three seasons. He also made the United States National Team in 1997.

“It’s great to honor two gentlemen who advanced to the Major Leagues in Jeff and Jason, and we will have two Aggies representing at the ceremony,” said Neal. “Our area has such a rich history of players that have reached the Major League and NFL levels. We’ve had some tremendous athletes that have shined in the spotlight in our little corner of the world and it is something our area should always cherish.”

He was drafted by the San Diego Chargers in the 13th round of the 1969 NFL Draft and played for the Chargers and went on to also play for the San Francisco 49ers.

“Bill Simpson, he was kind of known as “The Flash” in Port Neches,” said Neal. “We still hear so many stories today about how fast he was. He is also an amazing ambassador, and he and his wife have done great things with their church. They have spent a lot of time working with missionaries in other countries, supplying aid and doing a lot of positive ministry.”

He played for Bum Phillips at PNG and followed him to the University of Houston and played for him again and Wade Phillips was an assistant there too.

Humphrey was an icon, not only for being a successful lawyer but what he gave back to the communities he served.

His legal success afforded Umphrey and wife Sheila the ability to make significant contributions to education and the environment. Some of the charitable contributions of Walter and Sheila Umphrey include: the Sheila and Walter Umphrey Law Center at Baylor Law School, where the Umphreys provided the lead financial support;  The Sheila and Walter Umphrey Pedestrian Bridge, connecting the Baylor University campus to McLane Stadium and the Sheila Umphrey Recreational Sports Center on the Beaumont campus of Lamar University, Mrs. Umphrey’s alma mater.

Mr. and Mrs. Umphrey’s donation helped facilitate the return of football to the school.

The State Park on Pleasure Island is now Walter Umphrey State Park. Umphrey purchased the land and donated it to Jefferson County.