Mackenzie Haley, her coaches share why she is such a powerhouse for Lady Bobcats 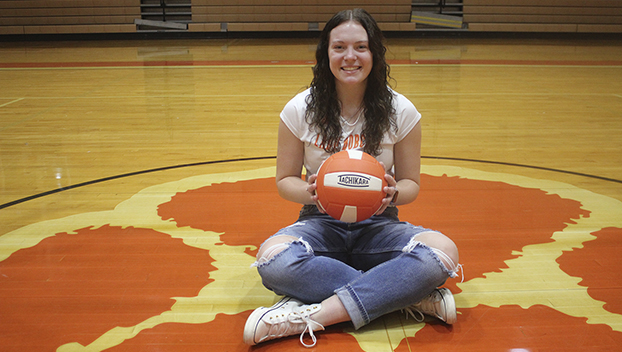 Orangefield senior Mackenzie Haley has been stellar at the net and a superb leader for the Lady Bobcats this season. (Van Wade/Orange Leader)

ORANGEFIELD – Senior hitter Mackenzie Haley is taking charge at the net this season, and opponents are certainly paying for it when the volleyball comes flying at them.

Haley had a strong season as a junior for Orangefield and has upped the ante even more this year.

“I feel so much more confident in my game this year,” said Haley. “I worked really hard in the offseason to improve. Playing club ball and beach volleyball a lot really boosted me as far as getting my overall game stronger.”

Haley has definitely been the leader in kills for the Lady Bobcats and enjoys her teammates believe in her to get the job done.

“Last season I wanted to do my best to help the team, and if we needed a big hit, I knew I was capable,” said Haley. “Madison Greenway was such a great player for us for so long, and she was so intense and could kill it from any spot on the floor. When she graduated, I knew I had to step into that kind of role.”

Haley likes how she slowly has grown into the top hitter role.

“When I was a sophomore I made the varsity. I was very timid, shy and lacked a lot of confidence,” explained Haley. “As a junior everything started to come together, and I became a lot more talkative and gained the confidence of my teammates.”

Haley gladly accepts a leadership role for the Lady Bobcats.

“I’ve always been the type of person that has been sort of a silent leader,” said Haley. “This year, I’m observing my teammates more and when I see something, I’m right there to give them pointers. I like that I’ve become more vocal and I really like helping the younger players coming up, that has been awesome.”

Coach Ashlee Peevey says Haley has been explosive. She’s the type of hitter any coach would want ten of, according to Peevey.

“She had a good year last year but she worked so hard this offseason to improve,” said Peevey. “She has done that and then some. She’s a powerhouse at the net.”

“We played a tough non-district schedule that really helped,” said Haley. “We’ve got several players that are in their first season on varsity, so we’re still trying to get that perfect chemistry. We are really getting better each week, we’re ready to make a run and do our best to make the playoffs.”

Junior Brianna Moore has been dishing out assists left and right all season and senior Harleigh Rawls, who is a tremendous all-around player, has played a key role in Haley’s success.

“Brianna, she knows exactly where I like it,” said Haley. “She always knows where I’m at. I’m so proud of her, she was like me. She was on varsity as a sophomore last year and was shy and timid like me. You could see her confidence grow in the offseason and she has been on fire. Harleigh, she’s just typical Harleigh. She does everything she can to help the team, getting kills, setting up great passes and diving all over for digs. She is definitely our energy.”

Peevey likes what Haley has brought as far as leadership.

“Mackenzie has really stepped up as one of the leaders,” said Peevey. “She’s the type of kid that leads by example. She does everything right and she does it in a positive way. She was up here all summer pushing herself and motivating her teammates all along, too.”

Haley is not done after volleyball season. She’s a multi-talent in track and field.

She runs the 300-meter hurdles, is a leg on the 400 and 800-meter relay teams and also triple jumps and high jumps.

“After playing club ball to about March, I get into track season and that is really when I’m in my best shape,” said Haley. “I eat cleaner, which helps me get faster. I’m really looking forward to seeing what I can accomplish.”

Athletic Director Josh Smalley is one of Haley’s biggest fans.

“I’ve been here 11 years and Mackenzie Haley is one of the handful of kids that really epitomizes what it is to be a Lady Bobcat,” expressed Smalley. “She does her best to reach her goals and not only is she physically tough, she’s mentally tough. She has such a good personality.”

Haley would love to continue to attack the net after she graduates.

“Volleyball is something I will always play, but I would love to do it at the college level and hopefully I will get that chance,” said Haley. “I want to get a good education. I want to get my degree in engineering and the goal is to become a mechanical engineer.”