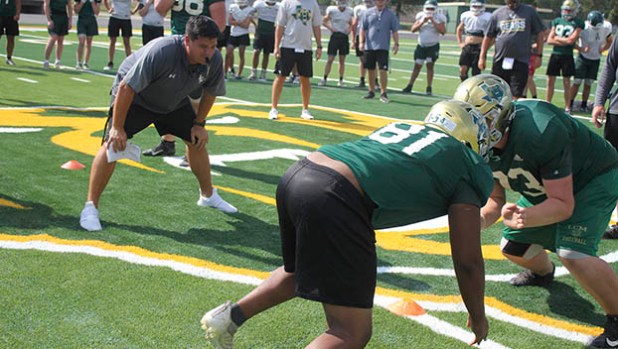 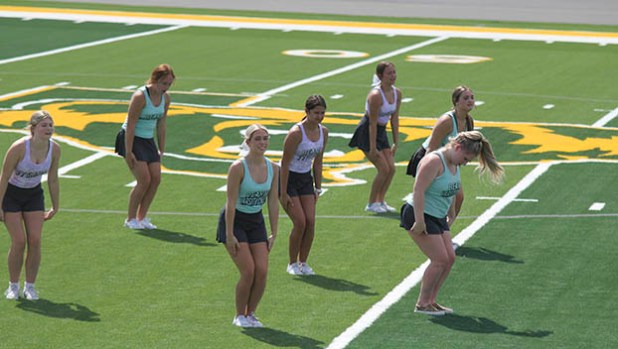 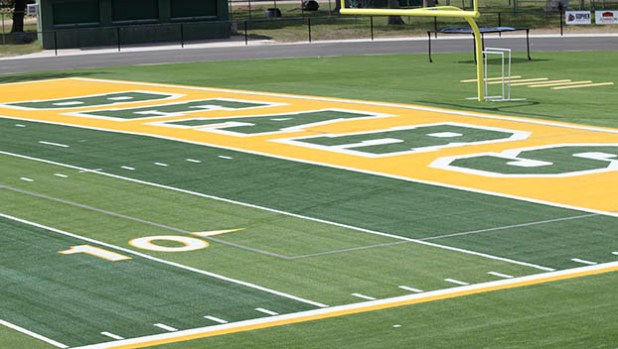 The Green and Gold "pops" in the end zone at Battlin' Bear Stadium. (Van Wade/Orange Leader)

No more practices or games will take place on the swampy grass at Little Cypress-Mauriceville High School.

The Bears got their first taste of their new turf field this week, and it was like “honey” for all of them.

“Man, it’s an awesome feeling,” said LC-M senior quarterback Dean Reynolds. “I know we had to shuffle our schedule around, but it was so well worth it. As a senior, and to get to play on it, it doesn’t get any better than that.”

The Bears are practicing in sweltering heat this week, but the turf is a little cooler than the old natural, swampy, muggy grass.

“That’s a good thing with the weather around here,” said Reynolds. “At night, during games, it’s going to be nice for sure.”

Athletic Director and head football coach Eric Peevey is thrilled for the program and really enjoyed the look in the Bears’ eyes when they hit the field.

“It’s been a long process and it took awhile, battling some weather but it is done and it is beautiful,” said Peevey. “The kids have been chomping at the bit for so long and the time has arrived. It’s so hot and humid this week, but I don’t think it’s bothering them a bit, they are eating it up.”

The Bears no longer have to worry about practicing on that old practice field way in the back of the high school.

“That is not only making the kids happy but us coaches, we’re loving it,” said Peevey. “No more worrying about getting that ‘mosquito dope’ out there or clearing off a lot of that dew in those early morning practices. And no more mud boots.”

Rain downpours have always set the Bears back over the years due to the old grounds.

Peevey said most of the other schools in the district have turf fields and indoor turf facilities that have been a big advantage.

“They continued what they needed to do, even in bad weather,” he said. “Here, we were stuck in the gyms and not getting the type of work in we always wanted to. Now we can. As long as we don’t have lightning, we can always go out and practice.”

Receiver Jacob Pollock was elated before taking the field.

“It was tough being patient but what a feeling,” said Pollock. “Coach Peevey really pushed for this and we’re so grateful for him. It’s just great for not only us football players, but the band, drill team and cheerleaders. Everyone can utilize it. It’s something the community can be proud of.”

Pollock, who has had a solid year hauling in passes, kind of wishes one thing. His brother Brendon Pollock, who graduated in 2021, was an all-district receiver for the Bears, and Jacob would have loved to have seen his big brother play on the new turf.

“Man, Brendon would have loved this,” said Pollock. “He would love to run some routes out here and he was such a good receiver. We pick on him some and make him jealous, but he’s proud for us.”

Assistant coach Hunter Gonzales, former an All-District quarterback and two-time Orange Leader Male Athlete of the Year in 2010 and 2011, was all smiles at the first practice.

“This is so great for the kids and the entire community and something to be so proud of,” said Gonzales. “A lot of thanks has to go to our administration to get this done. We’ve deserved it for a long time. We’ve never had great grass here. It’s always been swampy and hard to maintain, especially the practice field.”

Gonzales does have some great memories from playing on the old “Bear Swamp Grounds.”

“I would have to say the game against Livingston my junior year is my favorite memory,” said Gonzales. “We went through three overtimes and won like 53-50. I remember how exciting that ending was, but I also remember how torn up and muddy the field was afterwards. We didn’t care. We celebrated out there for a long time and we were muddy from head to toe.”

The Bears finally get to host their first home game Sept. 30 when they welcome in Spring Legacy for Homecoming. They will get plenty of practice time in on their new digs, too, with this week being a bye week.

“We’re going to be so fired up for that one,” said Pollock. “I want all of our fans to show up, pack the house and be loud. It’s going to be wild. It’s really going to be a special moment to always remember.”

The Honey Bear Drill Team and the Lady Bears softball team were also working out on the field before the football team started practice.

Peevey is definitely happy for all of the students who get to utilize the turf, especially the band.

“Man, those poor kids have always practiced their marching on that hot pavement in the parking lot year after year during the summers, and I’ve always had so much respect for them,” said Peevey. “They had to gut it out one more summer, but now they have this amazing field to practice on. I feel like it is just as much their field as it is the football team or any other sport.”

Peevey is thrilled with the type of turf the district went with, too.

“It is considered to be highest-rated safety padding in the country,” said Peevey. “The materials can last up to 20 years, and it can keep the field almost 30 degrees cooler than what the natural grass field did. That will certainly make the kids feel better on those hot nights, especially in August and September.”