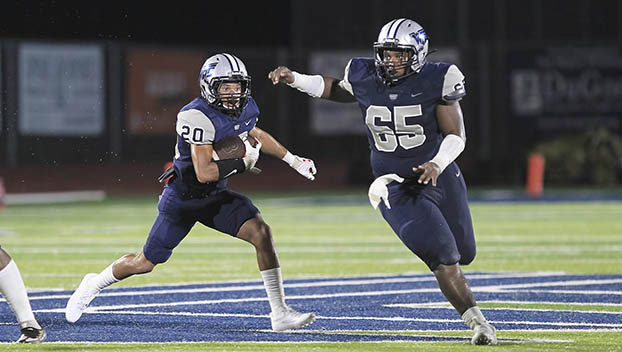 SILSBEE – It’s always a game in which you can throw out the records because when the West Orange-Stark Mustangs and Silsbee Tigers encounter each other, it’s usually a “doozy.”

Both teams were early favorites to battle for the top spot and they have to get after one another in the very first district game.

The Mustangs (2-2) or on a quest for their 12th straight district title. Their last district loss came at the hands of the Tigers in Silsbee in 2009.

The Tigers are certainly coming in with plenty of momentum after a 4-0 start.

The Mustangs are looking to bounce back after back-to-back losses to Port Neches-Groves and to Newton, which was 24-21 last week.

“The Newton game was a tough one because I thought we played well enough to win,” said Mustangs coach Hiawatha Hickman. “We moved the ball well but couldn’t cash in on some good field position a few times. Defensively, I thought we played well. We gave up a Hail Mary on fourth-and-a-mile near the end of the first half, and they got us on another big pass play in the second half. We had a tough pass interference call late that kept that last Newton drive alive. Overall, I thought our effort was good, much better than the week before.”

The Mustangs must slow down a Silsbee offense that has been explosive.

Hickman, who grew up, graduated and coached at Silsbee, feels this is the Tigers team they have been waiting on in Tigerland.

“All along, people there have talked about how this is the group of kids that are really capable of doing great things,” said Hickman. “They are definitely loaded with talent, especially at the skill positions. Some of those young guys got some great experience last year, and they have grown a lot, and they are still young.”

The Tigers have several dangerous tools in their arsenal, perhaps none bigger than receiver Dre’Lon Miller.

He has hauled in 15 catches for 427 yards and five touchdowns. They like to get him involved in the running game, as well, with sweeps and reverses. He has 128 yards and a TD on 12 carries.

“You have to know where that young man is at all times, he’s a handful for anybody,” said Hickman.

Tigers quarterback Mason Brisbane has a gifted arm, too. He has completed 51-of-81 passes for 820 yards with nine TDs and just two picks.

“Brisbane has a rifle and it’s no secret, they like to go deep,” said Hickman. “They throw those short passes well that turn into big gains. They like to snap the ball quick and work fast. They are young on the offensive and defensive lines and both have improved tremendously since the season started.”

Jonah Brown and Kevin Martin lead the Tigers ground game, combining for 285 yards and three TDs on 42 carries. Hickman said the Mustangs can’t sleep on Silsbee’s other two receivers: Ashton Cartwright and Maxwell Brisbane, who have teamed up for 22 catches for 254 yards and two TDs.

Hickman would like to see the Mustangs offense get churning and keep the explosive Tigers on the sideline.

“Our running game was pretty good against Newton and I thought our line blocked well,” said Hickman. “We really need to establish the running game to open up our passing. I thought Marcus Turner did a really good job distributing the ball in the air for us last week and showed that he has potential for a sophomore.”

Hickman wants to see the Mustangs continue to show improvement and expects them to play hard against the Tigers.

“Two losses in a row are rare around here but I believe we have a good football team,” said Hickman. “We’re banged up some with a few tough injuries here and there, but the Mustangs are ready to go out and battle. Every week is so important from here on out. It’s that first week of district play, and everyone goes in on equal footing. It’s where you need to make the most of the opportunities and get better every week.”