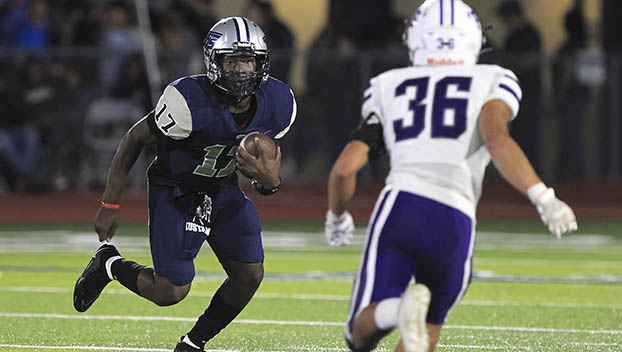 For three of our Orange County football teams this week, it all gets “real” as games from here on out count as far as playoff positioning goes with the start of district play.

For the Mustangs, that is just something WO-S fans have been accustomed to, going all the way back to the mid 1980s.

A huge streak is on the line Friday when the Mustangs head to Silsbee to start District 9-4A Division II play. WO-S has won 12 straight district titles with the last loss coming in 2009 on the road at Silsbee. Both teams were ranked in the Preseason Top 10, but the Mustangs have dropped their last two non-district tilts, while the Tigers are 4-0 and rolling up big numbers. Things could get interesting when the Mustangs invade what should be a hostile, full-house Tigers crowd. Mustangs fans need to get to the game early and be loud and proud.

While on District 9-4A Division II, so many prognosticators projected WO-S, Silsbee and Jasper to be the top “dogs” in the district, but possibly even the top three in 4A Region III Division II.

I’m going to go out on a limb and warn those three teams now, they better not “sleep” on a school just a tad southwest of Beaumont in the Hamshire-Fannett Longhorns. They are flying under the radar and are capable of knocking the Mustangs, Tigers and Bulldogs off on any given night.

Orangefield is ready to dive back into Class 3A Division I play after making the playoffs the last two years in the 4A Division II ranks.

Long-time Bobcats coach Josh Smalley assures everyone that moving down is never just “a walk in the park.”

The Bobcats open District 10-3A Division I play at home Friday against a Buna team that comes in with a little momentum.

Anahuac and East Chambers look to be the biggest threats in district play for the Bobcats, but as all Bobcats fans know, not only in football but all sports, never discount those Buna Cougars. That has been such a friendly and intense rivalry over the years.

Meanwhile the Little Cypress-Mauriceville Bears and Vidor Pirates must go through one more non-district game and a bye week before meeting each other to open District 10-4A Division I Oct. 7 at Pirate Stadium.

The Pirates and Bears tied for the district title last season, with Vidor earning the No. 1 playoff seed after defeating the Bears in district play.

Both teams are in the hunt again for that top spot, but there is one team that is lurking – and it resides in Lumberton.

The Raiders have 15 starters back, including eight from an explosive offense. Lumberton is racking up points left and right, including 108 in the last two non-district wins. Raiders quarterback Lucas Powell has flown under the radar somewhat, even after passing for more than 2,500 yards and 25 TDs last year. Lumberton could be the X-Factor, not only in the district but in the region, especially with an improving defense.

Both district races should come down to the wire. Don’t be surprised Nov. 4 if we still don’t know who the outright district champions are going into that final night.