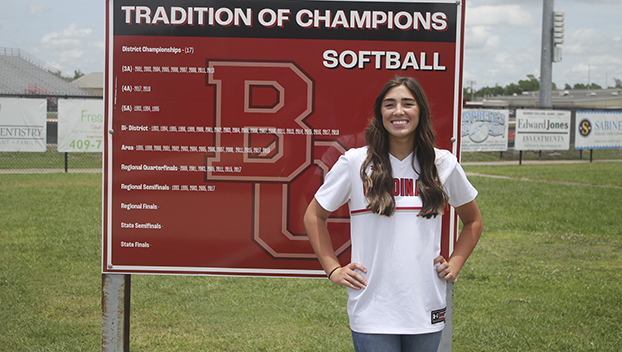 BRIDGE CITY – Bridge City junior standout softball pitcher Carson Fall made the announcement she has verbally committed to play softball at the University of Kentucky in the Southeastern Conference.

“I am so excited to announce that I have verbally committed to the University of Kentucky to further my academic and softball career. Thank you to my coaches, teammates, and most of all my family. I would not be where I am today without all of your support.”

Fall was the key cog that made the Lady Cardinals go last season as they strolled to a 27-7 mark for head coach Raven Harris. And then there was that perfect 12-0 run to win the District 22-4A Championship.

Bridge City ended up in the third round of the postseason, giving defending state champion Liberty fits before falling 2-1 in a decisive Game Three in the 4A Region III Quarterfinals.

Fall notched a 23-3 record. She tossed 165 1/3 innings and finished with a 0.55 earned run average. She allowed just 55 hits and posted a whopping 372 strikeouts. She amassed 16 shutouts that included two perfect games and nine no-hitters. She also hit .323 at the plate with three home runs and 14 runs batted in.

The University of Kentucky softball team finished 35-17 last season and made the NCAA Tournament. They were ranked No. 15 in the nation in the last regular season national poll.