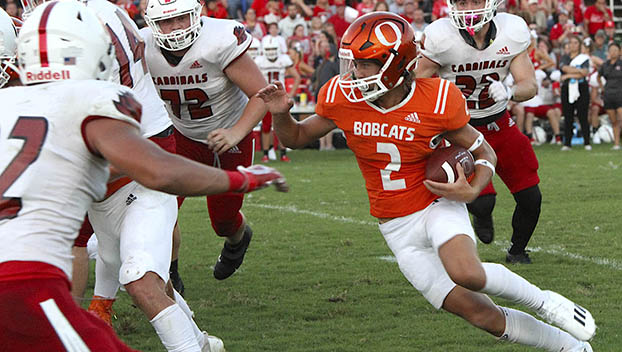 ORANGEFIELD – Games are really starting to count this week for several a lot of football teams across Southeast Texas.

That means district play is getting rolling and the Orangefield Bobcats are ready to start fresh when they open up district play against long-time rival Buna Friday at F.L. McLain Stadium.

The Bobcats have been anxious to get going in district action ever since they found out they were moving back down to the Class 3A ranks after making the playoffs the last two seasons in Class 4A.

“It’s a new game for everyone now, everybody is 0-0,” said Bobcat coach Josh Smalley. “We’ve played a lot of these guys in the past and it’s going to be a dogfight every Friday.”

Buna (1-3) checks in with some momentum after they blasted Kountze 75-6 in their last non-district game. The Cougar program made a change last week by reassigning head coach Gary Kinne and replacing him with Bridge City graduate and long-time legendary Buna head baseball coach Kevin Terrier.

The Cougars have been in every game, dropping tight decisions to Corrigan-Camden (28-21), Bridge City (23-20) and Crockett (21-20) before throttling Kountze in Terrier’s head-coaching debut.

“I’ve known Coach Terrier for a long time and he is a great guy, and just loves to coach kids,” said Smalley. “They have been in every game this year and could easily be 4-0 with a play here or there. It’s always been a tremendous rivalry and Buna always gets after us.”

The Bobcats (2-2) are looking to bounce back from a tough 33-6 defeat at the hands of Woodville on the road last week.

“It was a tough night for us and Woodville showed why they are one of the best teams in the area,” said Smalley. “We came out sluggish in the first half and got behind early. It’s a game that I feel the kids learned something from. We’ve had a couple good practices since then. Now is the time to put together everything you’ve worked on and get ready for those six games in front of us.”

Buna has removed itself from the Slot-T offense that ran for so many years under former long-time coach Bradley Morgan. They are running the Spread and are throwing the leather almost 60 percent of the time.

The Cougars are sparked by quarterback Toby Marse. He has a tremendous receiving group led by Kayden Dill and Landon Stephens. They also have a running back in Jacob Johnson that can take it the distance with his speed and is strong catching the ball out of the backfield.

“This isn’t going to be the typical Orangefield-Buna game when the games feels like it only lasts a little over an hour,” explained Smalley. “They really have some good athletes that run it well. The Marse kid has a really good arm. They have big receivers that run routes well and get open. The Johnson kid, he’s dangerous however he gets the ball.”

The Bobcats will look to get their running game going.

“It’s going to be physical up front,” said Smalley. “Buna is huge both on the offensive and defensive line.”